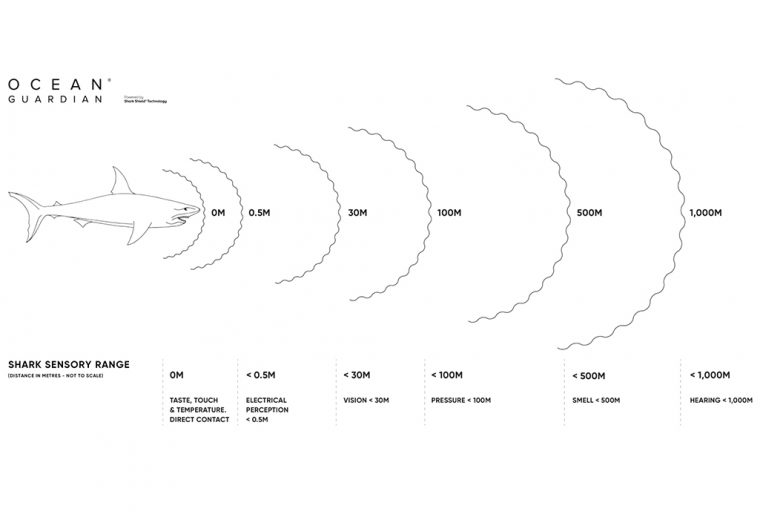 In 2020, Australia suffered the most shark attack fatalities in 86 years, while statistics published by the NSW Department of Primary Industries (DPI) show that 93% of all animals caught in their shark nets on NSW beaches were bycatch and that 55% of the total catch died.

The new LR1000 Shark Barrier has been developed in partnership with Armscor’s Institute of Maritime Technology division, Armscor is the acquisition agency for the South African Department of Defence. Using proven Shark Shield Technology, the LR1000 is the result of six years of research, development, and testing, resulting in a scalable solution for beaches, resorts, and aquaculture organisations experiencing financial loss due to shark predation or incursions.

Sharks have short-range electrical receptors in their snouts used for finding food. Shark Shield Technology is used to create a powerful three-dimensional electrical field which causes spasms in these sensitive receptors turning sharks away. There are no known harmful effects on sharks or humans.

Shore powered, the LR1000 can be installed in sections up to 400 meters in length with multiples of this possible to cover larger areas. The system consists of surface buoy’s spaced 3 meters apart, on each buoy is a free hanging antenna cable with depth coverage of up to 12 metres. The free hanging antenna provides low resistance to ocean swells, currents, and no resistance or entanglement risk to other sea creatures such as whales, dolphins, turtles, etc.

MP Jason Falinksi stated, “The Northern Beaches recently voted to remove environmentally damaging shark nets and drumlines, this is long overdue. What is also long overdue is the use of new technology that protects both wildlife, swimmers, surfers and our blue economy. I strongly urge the government and authorities to use the new technology alternatives such as Ocean Guardian’s Shark Barrier that do not adversely impact our environment.”

Lindsay Lyon, CEO of Ocean Guardian says, “We are experiencing enormous global demand for the LR1000 from iconic tourist sites like the Busselton Jetty in Western Australia to private resorts such as Great Stirrup Bay Island in the Bahamas, where we previously sold sixty of our BOAT01’s for resort protection. Shark attacks have a significant impact on local economies and tourism, and there is growing environmental demand to remove inhumane and harmful shark mitigation measures such as shark nets and drumlines. We’ve had exceptional growth in our B2C business during 2020/21 and the new B2B Shark Barrier will provide a transformational growth opportunity for our company.”

To fund the significant growth presented by the new B2B Shark Barrier the Company has also signed an agreement with VCF Capital Partners to act as corporate advisors to raise up to $10 million dollars through a private placement and/or an Initial Public Offering (IPO) in 2021/22.

“Australia has some of the best beaches in the world, coupled with the rate of developments in coastal towns plus the increasing rate of city dwellers opting for a sea change for better work/life balance driven by COVID, we have more people in the water, resulting in more risk. Ocean Guardian has the technology to implement protection in key tourist areas,” said Lindsay.