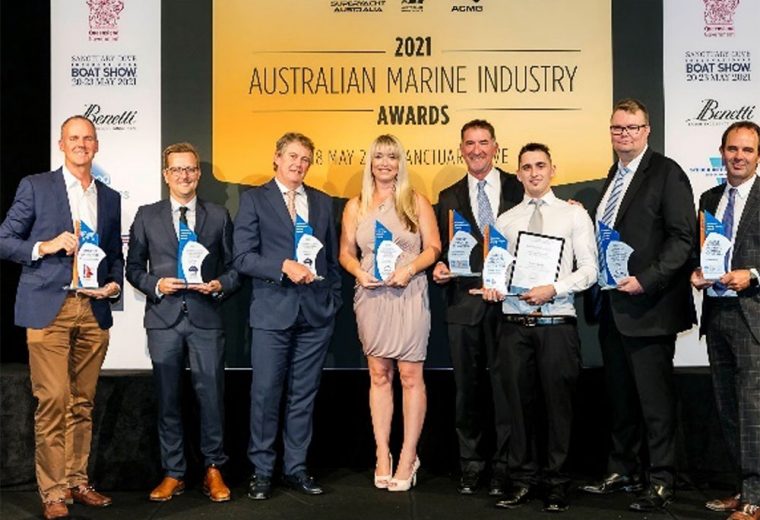 The 10th annual ASMEX Conference was capped off with a beautiful evening commencing with Pre-Dinner Drinks sponsored by Benetti Yachts followed by a celebration of the outstanding achievers in Australian superyacht, marine export and commercial Industry at the 2021 Australian Marine Industry Awards Gala Dinner.

The Gala Dinner, held at the InterContinental Sanctuary Cove Resort on Tuesday 18 May, honoured the worthy winners across eight highly competitive categories.

In the commercial segment, Aus Ships Group won the 2021 Commercial Marine Project/Design or Manufacturer of the Year Award presented by Rivergate Marina & Shipyard for its high-profile work on the diverse fleet of vessels including the Brisbane City Cat.

Tommy Ericson, CEO of Aus Ships Group, based at Rivergate Marina & Shipyard, Brisbane said “The Award is fitting recognition of our ability to deliver projects from end to end; being concept design to construction to delivery.

The 2021 Commercial Marine Service Provider of the Year was won by Harwood Marine and accepted by Ross Roberts, Managing Director.

“Harwood Marine’s support for the Commercial Marine sector is our core business and we are one of the very few large commercial shipyards that have not been secured for defence contracts. Due to the recent acquisitions of large lift capacity shipyards on the East Coast there has been an increased demand on our services for repair and maintenance as well as conversion and new construction, and replacement of ageing fleets,” said Ross Roberts,

In the Superyacht segment, the most hotly contested category of the night was the Superyacht Industry Service Provider of the Year award, which was awarded to Coral Sea Marina Resort for their outstanding service provided to visiting superyachts, crew and guests and proudly accepted by CSMR’s Marketing, Sales & Service Manager, Joscelyn O’Keefe.

Gold Coast- based, Superior Jetties, claimed the 2021 Superyacht Industry Project/Design or Manufacturer of the Year presented to Gold Coast based Superior Jetties. Their outstanding submission focussed on the design and construction of what will be the largest superyacht berth in Australia – a game changer for the industry!  At 163 metres in length and 4.6 metres wide floating pontoon. The berth, currently under construction at the Southport Yacht Club on the Gold Coast, has been engineered and designed to welcome and accommodate some of the world’s largest vessels.

The 2021 Australian Exporter of the Year was announced as Riviera Boats, back-to-back winners recognising Riviera’s immense increase in export sales and export revenue growth for the last two years running.

The 2021 Marketing Strategy of the Year award was presented to David Trewern, Founder of Byron Bay based Fliteboard. The judges were impressed with company’s ability to pivot its marketing strategy during Covid-19 from key marketing initiatives such as trade shows, events and travel, to promoting in a predominantly digital sense. Fliteboard’s focus centered around sharing, engagement and growth of its online community.

The 2021 Apprentice of the Year award, who receives a trip to the worlds largest marine equipment trades show, METSTrade in Amsterdam was awarded to Robert Smith from Superior Jetties for his dedication to the industry and focused on the knowledge he has gained from his journey. “Robert’s ability has led him to accurately and competently complete an entire job from reading and interpretating drawings, actual fabrication/construction through to installation. These skills have given him the opportunity to work on some of the largest jobs Superior Jetties has recently completed.”

The final award of the night, the 2021 Marine Industry Champion, was presented by Councillor William Owen‐Jones from City of Gold Coast. Accompanied by a huge round of applause this was awarded to John Hogan, CEO of Superior Jetties.

“John Hogan is a dedicated marine industry professional, passionate about the innovation and manufacture of durable, functional and aesthetically pleasing products for commercial, residential and resort berthing applications.   John understands the water and has specialised knowledge of the technical nuances of aquatic structures and the engineering challenges of designing waterfront options,” said Councillor Owen-Jones in presenting the award.

“It’s been a very challenging but rewarding year which saw the whole team pulled together to overcome adversity. I’m humbled to receive the award and to be recognised by my peers,” said John Hogan.

Sincere thanks to the judging panel for the 2021 Australian Marine Industry Awards: MaryAnne Edwards Chair Judge

For more details on ASMEX 2021 or to register for this key industry event go to www.asmex-conference.com.au