Slick operation off Narooma was not oil that it seemed 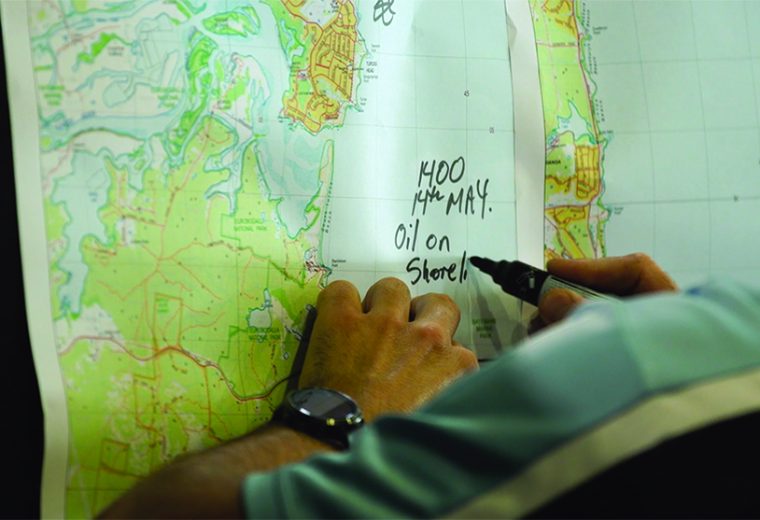 The state’s biggest ever oil spill exercise has unfolded on the south coast, involving an array of specialists, helicopters and fixed wing aircraft.

“Day one we introduced the scenario which involved the release of 800 tonnes of oil from a damaged oil tanker off the Narooma coast, with major impacts expected at Montague Island and the Narooma coast,” Mr Hutchings said.

“A fluorescein dye was used as a target for the spray aircraft to simulate and track an oil slick, and to allow for modelling and response to the expected trajectory of pollutants likely to impact the coast.

“The second day involved setting up shoreline facilities which are used to clean oiled wildlife, along with decontamination facilities.

“It’s no coincidence this exercise was held so close to Montague Island, which is a highly sensitive environment and known for its large colony of little penguins and a thriving colony of fur seals.

“We need to be adequately prepared for any marine pollution incident and that includes having the equipment and capabilities to treat and rehabilitate any affected wildlife.

“Officers carried out a number of drills, including a shoreline equipment test, a demonstration of how to set up an incident control centre and wildlife facility, as well as working with helicopters, drones and aerial dispersant spraying aircraft.

“Ensuring we maintain these skills is crucial to protecting the community’s safety and the environment.

“NSW Maritime responds to several marine pollution incidents each year. The most recent was last year when cargo ship APL England lost 50 containers off the NSW coast, with debris washing up on NSW beaches from Port Stephens to Illawarra.

“Rain, hail or shine, our officers and supporting agencies engage in these training exercises to sharpen their knowledge and abilities. Training days such as these puts NSW Maritime in great stead to be able to respond as efficiently as possible to pollution disasters that impact our waters.

“Effectively responding to such incidents like marine oil spills, chemical spills and major shipping incidents, requires a coordinated approach that can only be achieved through rigorous training exercises,” Mr Hutchings said.