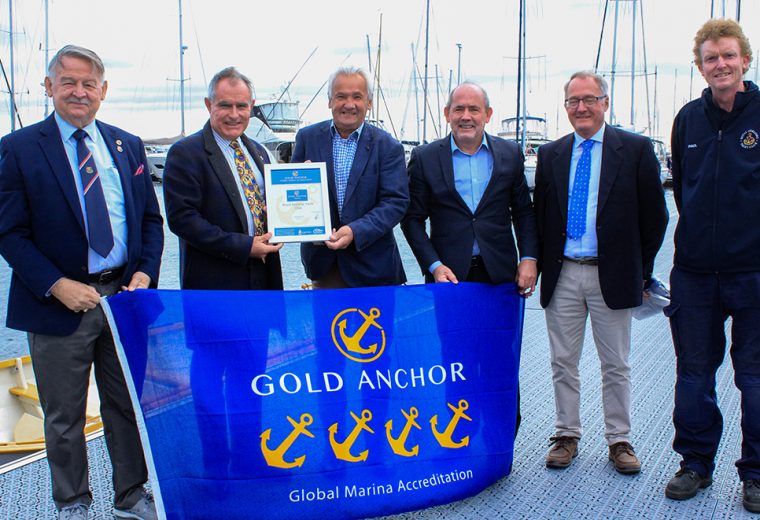 Two marinas on the northwestern shores of Port Phillip Bay have received elevated Gold Anchor ratings from the Marina Industries Association (MIA) in recognition of recent facility and service investments.

The Royal Geelong Yacht Club (RGYC), situated on the shores of Corio Bay in central Geelong, plays an integral role in the community, providing facilities to members and boaters, including sporting activities and water access for locals.  In late 2020, RGYC was named Australian Sailing’s Club of the Year, providing further indication of the Club’s commitment to provide a world class marine facility and sporting club.

RGYC has a clear vision for its future, having developed a Masterplan to guide its investment over the next decade. This year, a $10M wave attenuator was completed which provides protection to the RGYC marina and allows the public to ‘walk on water’.  A joint initiative between the Federal, State and Local Governments as well as RGYC, Wangim Walk, the 440m wave attenuator is among the longest public on water walkways in the country and is now one of Geelong’s most treasured community assets.

Last Thursday, RGYC was presented with a 4 Gold Anchor rating by MIA President Andrew Chapman, Vice President John Spragg and Director Stefan Borzecki.  In presenting the award Mr Chapman commented, “The MIA applauds the investment of the various governments and RGYC in this wonderful community asset which is a great outcome for the members of RGYC, the local community and the boating public. The MIA is proud to present 4 Gold Anchors to RGYC as it signals to the boating community the Club’s commitment to the facilities and levels of service that the Club will offer its members and customers.”

On hand to accept the award was Commodore Stuart Dickson, who said, “I am very proud to accept this award on behalf of our members.  It is wonderful recognition of our recent investments and great to know that our future investments will continue to be recognised in this way. The protection the attenuator affords the marina means that we can now confidently continue with the marina upgrades and replace the old, fixed jetties with floating pontoons.”

Phil Clohesy GM of RGYC added, “The attenuator, Wangim Walk, is named after its shape as Wangim means ‘boomerang’ in the Wadawurrung language.   It is great to be able to recognise the indigenous heritage of the area in this way.”

Earlier this year the marina took delivery of a hydraulic Roodberg trailer.  Catering for vessels up to 35 feet and 10 tonnes, it is the perfect tool to pull vessels out of the water for maintenance or upland storage.

Marina General Manager Allan Cayzer explained the future plans to create a vibrant boating hub at Wyndham Harbour, “Construction of our dry stack will commence later this year and will be suited to boats up to 30 feet and 10 tonnes. We have very strong demand and expect it will be very popular with the fishing community. We have recently renovated our wood fire pizza restaurant and added a Mexican food restaurant and Fish & Chip outlet. These restaurants offer expansive views out to Port Phillip Bay and beyond to the city of Melbourne skyline.”

Wyndham Harbour is attracting world class events and last month played host to Round 1 of the 2021 Offshore Superboat Australian Championships which attracted a large fleet of impressive boats competing over the weekend.  And for the locals, the marina holds its annual ‘Hooked on Wyndham’ Fishing Competition which rewards the largest catch in several categories and includes a division for the under 13s.

Following the 5 Gold Anchor presentation, John Spragg, VP MIA and VP Bellingham Marine commented, “It is great to see marinas use the Gold Anchor Program to assist them make investment decisions around their facility upgrades. What is happening on the western side of Port Phillip Bay is tremendous for the Victorian Boating community, providing great destinations, a range of options and premium boating facilities”.