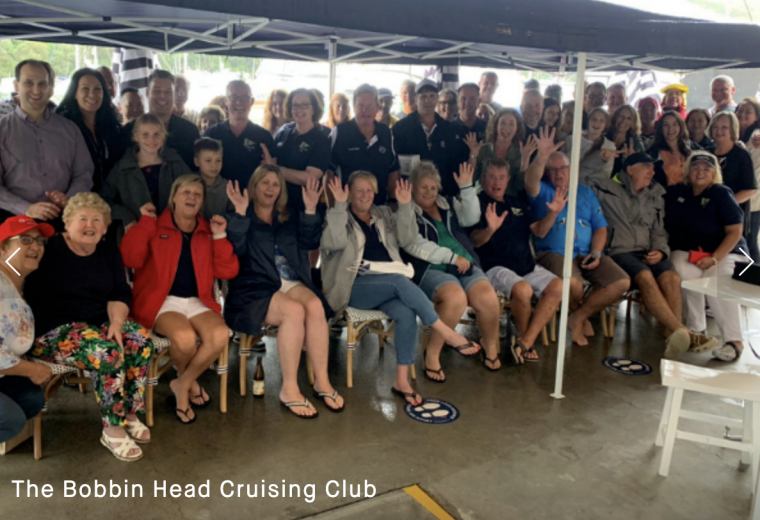 For the Bobbin Head Cruising Club (BHCC), gusty winds and a downpour wasn’t enough to stop them from hosting their annual fundraising event on March 14 to support Cure Cancer. Altogether, they’ve raised an incredible $80,000 to date – enough to support 1,600 hours of cancer research.

With the boats docked at the scenic Empire Marina Bobbin Head, the BHCC members gathered for an eventful day filled with a raffle draw, auction, and talk from Cure Cancer alumnus Dr George Sharbeen. A highlight of the fundraiser included a delicious luncheon menu cooked by celebrity chef and BarbeCURE ambassador Adam Moore. “Although the skies opened with rain, that did not stop the determined spirit of the charitable BHCC community; what an epic Sunday it was!” said Adam.

Adam’s barbeque feast included a decadent cheeseboard and a twist on the traditional barbeque dish. “I loved showcasing fruit on the grill for a tasty dessert after a beautiful barbeque. It made it more fun and I enjoyed sharing my tips on making their barbeques even more exciting. It was such an honour to share stories and some laughs with these amazing people.”

“What started as a cold day reminded me that people who have cancer often have days quite similar. Knowing the supporters of BHCC turned up the heat to give so much warmth and love for cancer research left me feeling empowered. I encourage everyone to turn their barbeques into a BarbeCURE as the BHCC have.”
— Adam

For many of the members, excitement filled the air when the winner of the BHCC Perpetual Fundraising Prop was announced. A beloved club trophy featuring an engraved plaque and propeller, the Prop is traditionally awarded to the highest bidder at the club’s auction, with funds going towards life-saving cancer research. This year’s Prop winner was Club Director Scott and Genevieve Andresson, club members for just under ten years.

Recognition is also given to the Club Member whose boat has raised the most funds in the annual event. New Club members, Tim and Loretta Glover, were this year’s recipients.

ALL HANDS ON DECK TO CURE CANCER

Over the last twenty years, the BHCC have remained Cure Cancer’s longest community fundraisers, with their dedication to cancer research unwavering. As a BHCC member explained, “The club’s early core culture seemed to be a simple love of boating and the camaraderie that went with it. However, there was a developing interest in helping others through charity work and so the club took part in the Sail For Cancer events to support the Leo & Jenny Leukaemia Foundation (now Cure Cancer). This generous spirit continued and is now part of the Club’s constitutional objectives, seeing the second Sunday in March set down for an annual Cure Cancer fundraising activity.”

With a collective fundraising total of $320,000 (equalling three research grants), the BHCC couldn’t be more dedicated to continue supporting Cure Cancer’s researchers. The current Club Commodore says, “It’s evident that an emerging cancer researcher can only start their grant-writing after they’re given the opportunity through funding. Whilst we cannot all be researchers, the fact that we can give – and willingly do so – means we can sow the seeds for future funding and give researchers the best chance in finding a cure.”

A NOTE OF THANKS

“It’s thrilling to think our fundraising efforts could potentially unlock unexplored, life-saving research and, even more so, as it has become evident that there are numerous cancers now impacting many of our boating families, friends and acquaintances.”
— BHCC Club Commodore

From everyone at Cure Cancer, we would like to thank the Bobbin Head Cruising Club, their sponsors, members, Dr George Sharbeen, Chef Adam Moore and everyone involved for their commitment in supporting vital cancer research. We are incredibly grateful for their continuous determination in helping us fund the next generation of brilliant cancer researchers.

Show your support to the Bobbin Head Cruising Club by donating to their fundraising page here or host your own BarbeCURE to help Cure Cancer: