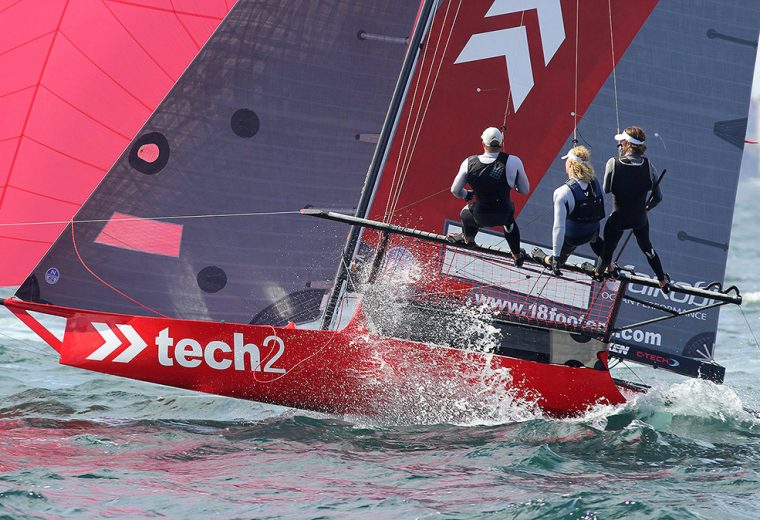 The defending Australian 18ft Skiff champion tech2 team of Jack Macartney, Charlie Wyatt and Lewis Brake retained the title when the team won the 2020-2021championship, which concluded on Sydney Harbour.

The two teams went into the final race of the championship separated by just two points and a possible match race situation looked a possibility.

Unfortunately for those looking forward to the contest, the Smeg team was recalled after a premature (OCS) start and the team took no official part in the race when the crew elected not to return and instead sailed over the course with the rest of the fleet.

While the championship victory belonged to the tech2 team, today definitely belonged to the very experienced Winning Group team of John Winning Jr., Seve Jarvin and Sam Newton which took out the race by 1m31s from tech2, with Andoo (Marcus Ashley-Jones, Jeronimo Harrison, Cam Gundy) a further 1m25s back in third place.

Right from the start teams were tested to make the correct call on the best course to sail.  The work from the start, across the harbour Taylors Bay to Rose Bay, saw a split in thinking as most of the fleet sailed to the east of Shark Island, while others chose a western side course.

Andoo chose the western course and led narrowly from tech2 at the Rose Bay windward mark, with a large group right on their tails as spinnakers were then set for the long run down to a bottom mark off Robertson Point.

Directional shifts to the east caused a number of positional changes on the run and when the fleet reached the Robertson Point mark, the Winning Group team had taken a narrow lead over Andoo and tech2.

Coming out into the centre of the harbour, Shaw and Partners and Andoo gained on the leader when they both elected to sail to the left of the course.

Shaw and Partners’ crew paid a penalty by electing to set a spinnaker immediately after clearing the Clark Island mark while the rest of the fleet elected not to set an extra until almost down at the Chowder Bay mark.

Winning Group grabbed the lead back on that run and from that point the team’s crew work and tactics were superb over the rest of the course as they opened up a comfortable margin over the nearest challengers.

Racing throughout the fleet was excellent and continued until the very end of the race with just 19s separating the fourth place Finport Finance and the eighth placed Shaw and Partners Financial Services.

Today’s result sheet and overall pointscores are attached, along with images from the race.

The annual Supercup race, featuring many past 18ft Skiff champions, Olympians, Round-the-World and America’s Cup competitors, will be conducted on Sydney Harbour next Friday (February 26).

Race 15 of the Club Championship, will be conducted next Sunday.

Spectators can follow both races on board the club’s spectator ferry, however due to the COVID-19 policy, numbers are limited.  Booking online through the club’s website www.18footers.com is essential.

For those unable to make it out onto the water, the club’s live broadcast team will be on Sydney Harbour to capture all the action.  Live streaming is available at www.18footers.com by clicking on the ’18 Footers TV’ link.

Follow all the club’s racing throughout the 2020-2021 Racing Season: