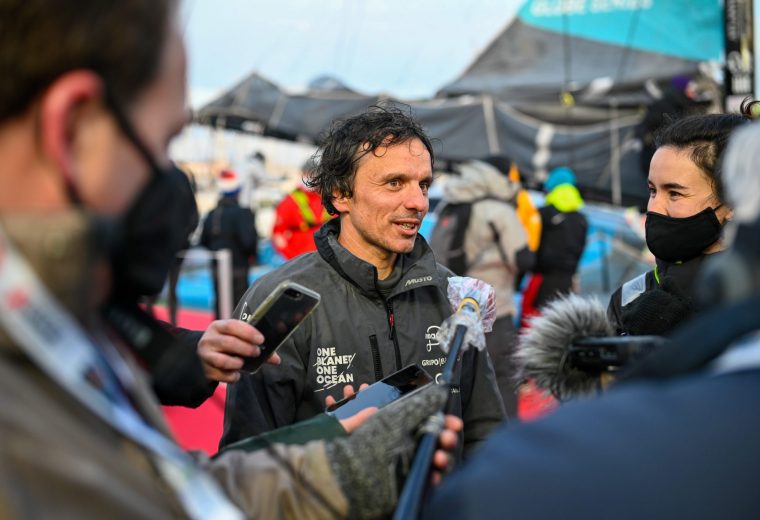 Didac Costa, a Spanish skipper with an international reputation

He may be relatively small in stature, quiet and reserved in nature but the Catalan fire-fighter Didac Costa once more captured the hearts and minds of the Les Sables d’Olonne public and ocean racing fans when they watched his return back to the Vendée Globe race dock today after taking 20th place on his second consecutive Vendée Globe, his third back to back non stop round the world race.

When he had to return back to the start less than an hour into his race in November 2016, his counterparts from the local Les Sables d’Olonne fire service looked after him like he was one of their own, ensuring his generator was repaired as quickly as possible and sending him on his way four days after the fleet had left.

Their pride in Costa’s second race was obvious today as the firefighters laid on an impressive spectacle of flares, smoke bombs and waterjets and led a rousing reception in his press conference for the 40 year old who returns to his own full time job on Friday and will have to do the return delivery back to Barcelona in stages because he has no holiday allocation left.

Costa, who admitted to have taken two right foot sea-boots on his race, chuckled to himself …

“I have had the best holiday, now I have to return to work!”

On any successive Vendée Globe the target is always to go faster and better than last time. And this time Costa at 97 days and 6hrs he was 11 days 13 hours quicker than when he finished 14th in 2016-17, but almost as important he had successfully paced himself against the 94d 4hrs record of his boat when it was sailed in 2000-2001 as Kingfisher by Elle MacArthur until a final 1,000 miles detour round the Azores high saw that target slip.

“I have never stopped learning and surpassing myself, every day.” Costa said looking tired, slightly bemused, his body still constantly twitching involuntarily, reacting spontaneously to his brain’s imagined movements of the media platform. His eyes twinkling, he recalled the southern oceans with the quiet delight of having brought himself and his famous boat back unscathed.

“With each turn I was measuring myself against Ellen MacArthur’s times, and for the most part I managed to do the same times as her. It was really my reference. I had to take a big detour in the North Atlantic which slowed me down a lot compared to the time it had been in, but otherwise I managed to keep up the pace the entire course. The other reference was Pip Hare she has got a boat from the same generation, I was trying to stay as fast as her.”

There are six IMOCAs still in the North Atlantic including four still racing, Isabelle Joschke and Sam Davies are fighting to complete their circumnavigations after their retirement. Reached this morning, Manu Cousin (Groupe SETIN) is particularly focused, studying the succession of big depressions in the Bay of Biscay:

“Since this morning I have been watching the weather forecast to see how I will be able to pass them and get into Les Sables d’Olonne. I’m not sure how to go about getting past this area early next week. I still have to work on it. Especially with my injured boat, I don’t want to risk going into such strong conditions because the files predict 50 knots. I have to remain very safe to be sure to finish.”

That is the same outlook for Clément Giraud who is expected to finish Tuesday morning and who has been working tirelessly in very unstable winds, constantly trimming and looking after his boat. The last skippers still at sea are equally worthy of admiration for their tenacity, and their determination to cross the finish line.