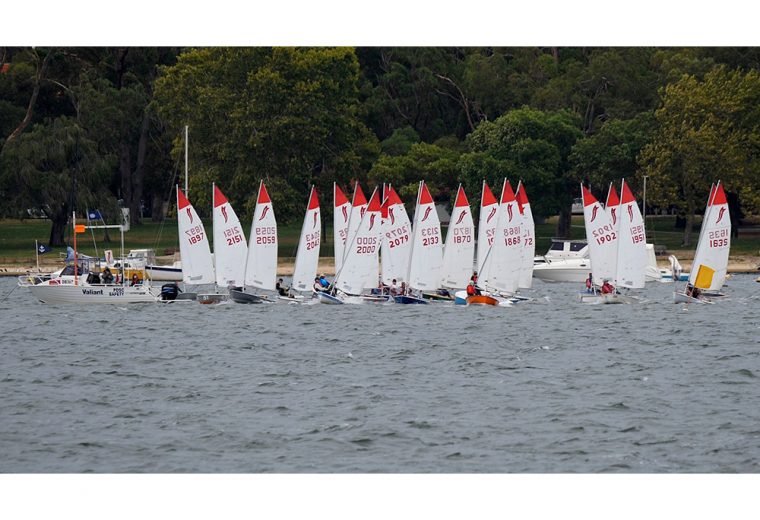 On Saturday 6th February with weather unpredictable due to a low off the coast and winds predicted to be around 15-20 knots Easterly, Perth Dinghy Sailing Club held Heats 3 & 4 of the State Championship in Matilda Bay.

Starting in 20 knots easterly the fleet got away in Heat 3, around the 1st Mark – Scott Olsen followed by Tony Carr, Carl Girolamo, Bill Gillham and Lane Bauer.  Being a short course that was also how they finished over the line.  First lady to finish was Narelle Thomas.

Heat 4 started with a wind strength of 28 knots constant gusting to 30 + knots in lumpy water. The PRO Steve Burt hesitated but remarked, “they are Sabres they will handle it, lets give them the long course”. After a very fast reach around the 2nd Mark it was Scott again leading the pack being chased by Bill, Carl, Tony and Lane. After some adrenalin rushed reaches the fleet crossed the finishing line. Scott 1st followed this time by Tony, Carl, Bill, and Lane in 5th place.  Narelle was again the first lady to finish.

When the sailors reached the shore the common comment was, the reaches were fantastic and Narelle remarked “what a blast”. One lady sailor who would not normally have continued in a race in those conditions was ecstatic when she got to shore, so pleased she had proven to herself she could handle the conditions even though tough.