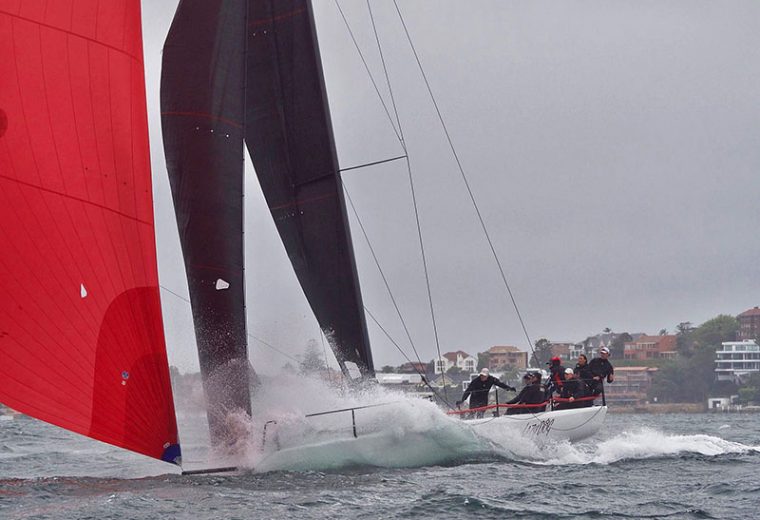 Sydney returned to deep winter for the MC38 class’ penultimate act of their 2020 season, temperatures in the low to mid-teens with rain and southerly gusts up to 30 knots on Sydney Harbour blowing up Ginger’s kite and sending hundreds of litres of saltwater cascading over the decks of the eye-catching 38 footers.

Seasoned campaigners Lazy Dog (MHYC), skippered by Shaun Lane for Act 5 with co-owner Quentin Stewart unable to make the series, wrapped up the pointscore with a four-point breather to Lightspeed.

“It was pretty testy out there; some boats saw 32 knots, we saw a maximum 26 knots from 150 degrees,” Lane said. “Royal Sydney Yacht Squadron’s race management team did a great job; it wasn’t looking like we’d get any racing in with the forecast for 30 knots. Today was all about boat handling and not making mistakes. We came back from the dead many times, and we were happy with our downwind moding.”

For Christian Beck, making his class debut as owner/driver of the MC38 InfoTrack (MHYC), it was baptism by fire, and he decided it was prudent to handover the helm midway through race six to veteran yachtsman Doug McGain.

Boat of the day, easily, and second overall was Steve Barlow’s Lightspeed (CYCA), back from a long hiatus while Barlow recovered from a shoulder operation, and then an OCS and an average set of results on day one. “After yesterday the boat was going on eBay and I was taking up lawn bowls,” he joked.

Three day two bullets on the windward/leeward track between Athol Bite to the top gate at Rushcutters Bay changed his mind. “I like heavy air sailing, and when you’ve got one of the best in the world, Sam Newton, trimming mainsail, your life as a steerer is much better. We had good boat speed today, in 28 knot puffs how you handle the gust response is key. It all seemed so easy and procedural. Happy days!”

Harry Price in the role of tactician is one of Lightspeed’s new-look crew, some of his match racing teammates joining regular crewmembers Newton and Troy Tindill on jib trim.

While InfoTrack is a new campaign for Beck, who owns the supermaxi of the same name, having Tom Slingsby call tactics plus Olympic 470 silver medallist Will Ryan and allrounder Mitch White running the boat gave the new owner confidence. At the end of the weekend he declared his debut regatta: “So much fun! The boats are so fast, and so close. It was incredible – probably the most incredible sailing I’ve ever done.”

InfoTrack’s opening race in northerly winds was less than ideal. A lifeline broke, spilling three crewmembers into the water, one of whom was Beck’s 13-year-old son Indy. It was less than a minute until he was retrieved but during that time he had the spinnaker sheet wrapped around his ankle, restricting his ability to swim free. Unphased by the incident the teenager was back on the boat and on the runners for race two.

Sunday’s showery conditions meant Indy spent a second day cold and wet as Sydney’s temperature plummeted from 26 degrees on Saturday to a maximum 15. The younger Beck was “stoked” with their results, anticipating they’d be at the bottom of the pile, and excited to reach 19 knots of boat speed downhill with worn-out sails (new ones are on the way) in the heavier air.

On being in close company with Slingsby, an Olympic gold medallist, winning America’s Cup sailor, SailGP winning helmsman, current Moth world champion and as of Friday, Australian Sailing’s Male Sailor of the Year, he was nonchalant. “We’ve been on training sails together. It was a good learning experience; this weekend I learnt about climbing in and out of the rails (lifelines) and how to predict gusts.”

MC38 class president Shaun Lane is delighted with the one design fleet’s newfound zest, thanks to Peter Harburg buying in with Black Jack, which is racing in Queensland while the crew wait for the NSW/QLD border to open, and now Beck, who purchased the former Kokomo from owner Lang Walker two months ago. “There is a lot of support, we would have had eight MCs this weekend, only Swish is taking a while to get their keel sorted.

“InfoTrack had an unbelievable first outing…what a nice welcome to the class! They’ve got a fantastic crew behind them and will be up there in the future, no doubt about it. Though they sailed exceptionally well, we can’t let them win their first regatta. It doesn’t work that way,” the president and winning skipper laughed.

Next on the calendar is the final Act 6 over the weekend of November 28-29 out of the Royal Prince Alfred Yacht Club.