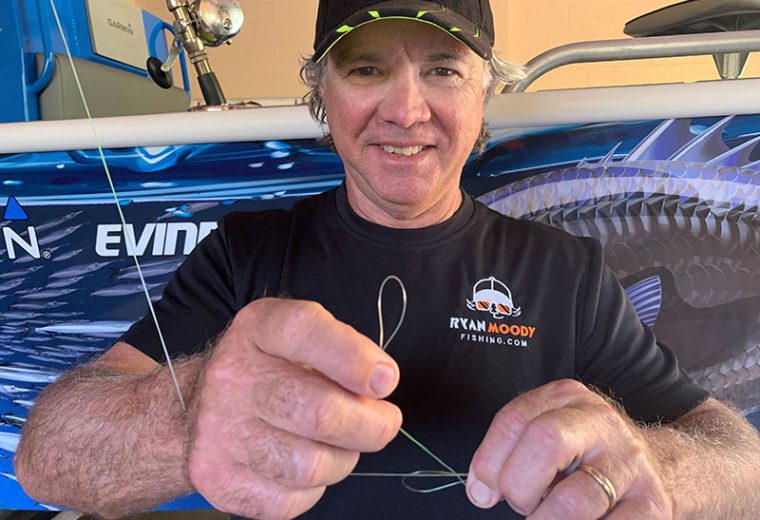 Look up the term “fishing knots” on Google and you’ll be confronted with more than 50 million results.

But Australia’s best credentialled fishing coach, Ryan Moody, believes you don’t need to wade through all those references – you probably only need to know how to tie six basic knots.

He lists the essentials as the FG knot, the Perfection Loop, the Bimini Twist, the Paternoster dropper loop, the Blood knot and the Albright (including his own modified version of it with a leading ’ramp’ to let it run more smoothly), as the essentials.

And why does he just go with those? Because unlike others, he has 32 years as a combined formal fishing educationalist, champion game fisher, charter skipper, webinar tutor and marine electronics tutor.

There are solid, fact-based reasons for using particular knots. His is not a case of just selecting a way to attach a hook to a line. Instead, it’s a case of why to use a particular knot and the answer goes way beyond the over simplification of its effect on the line’s breaking strain.

That unrivalled bank of knowledge behind him is the reason he advocates strategies such as using a loop connection from your line to a shallow, hard bodied lure, rather than a snap swivel, when targeting large barra. A big barra can open a snap swivel when it slams its jaws shut on the lure, or when performing acrobatics under the water. Ryan calls it “barra boofing” – the fish’s efforts to chuck the lure.

Yes, you can get away with a snap swivel on the smaller, school sized barra, but you had better arm yourself with a Perfection Loop if you are going after the one metre bruisers. He’s watched them feed underwater and has seen how hard and fast they snap their bottom jaw. “If a snap swivel comes into contact with their jaws, they pop the sides of the snap swivel together and open them up very quickly. I’ve seen this happen on numerous occasions,” Ryan said.

The FG knot provides­ a near-seamless way to join a leader to the main line which will pass easily through the guides on a fishing rod. And that also applies to those tiny, micro-guides on specialist jigging rods. This slimline knot is part of what constitutes a “wind-on leader”. It feeds through the guides on to the reel. It allows fisherfolk to retain a long leader that otherwise could not be wound on to the reel. That long leader is essential for species like coral trout, mangrove Jack and fingermark which run for cover causing abrasion to the lighter, main line as it flicks over sharp rocks and coral.

The FG is castable and it’s strong. It’s ideal for joining a mono leader to braid and it’s a “must have” in the serious angler’s armoury.

The Albright knot is an alternative to the FG knot in terms of being able to flow through rod guides. It binds a length of braid around a monofilament loop. Ryan’s version has a small build-up of line in front of the line proper. It eliminates the ‘leading edge’ that sometimes forms on the knot. Ryan advocates doing half a dozen wraps (which are hitches) of the braid in front of the mono to form a leading ‘ramp’.

The Bimini Twist is an essential part of game fishing, but is a knot that many fisherfolk could use in other applications as well. It has the fantastic advantage of being a ‘shock absorber’ knot, one that retains some elasticity to counter the shock of a heavy hit from a fish. That’s why it is so popular on game boats. The Bimini Twist can be a daunting knot for many people, but there’s no need for fear. In fact, most people can learn to tie it in around 20 seconds with a little practice, according to Ryan.

Similarly, the Paternoster or dropper loop often is thought of as a deep sea rig. But it also is a great knot for snaggy areas and land-based fishing from rock walls – yes, from rock walls.

Finally, there are various versions of the Blood knot. The basic one is used for tying mono to hooks, but the Double Blood knot is a great one for joining mono to mono. You do this when adding an extra ‘shot’ of line to your reel.

One of the keys to becoming very proficient with knot tying is to know where to put your fingers and when.

How do you hold the twists in a Bimini before locking it off? How do you keep the middle loop open in an Albright while doing approximately 10 wraps?

Ryan Moody Fishing has a series of videos explaining exactly that – detoxing the complexity of knot tying.

They’re free and you can access them via Ryan’s web site: www.ryanmoodyfishing.com