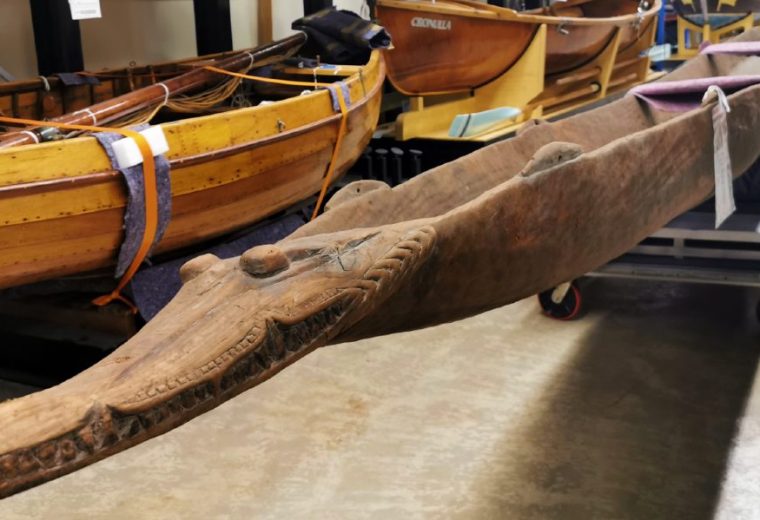 A story of ocean navigation driven by place and people rather than empire and nation opens June 22 at the Australian National Maritime Museum, Darling Harbour.

Under Southern Skies, a major new exhibition at the Australian National Maritime Museum incorporates the rich and fascinating history of expert navigation throughout the ages.

From the importance of the night sky in Torres Strait Islander navigation and voyaging to Cook’s observation of the transit of Venus, planets and stars unite the long history of all navigators around Australia.

This exhibition includes new acquisitions and collection objects from Australia’s Aboriginal and Torres Strait islander Peoples and Indigenous Pacific navigation, as well a selection of important new material associated with James Cook and other European navigators.

The exhibition starts from the true beginning of navigation in the region, that of First Peoples including Aboriginal and Torres Strait Islanders, Indonesian, Papua New Guinean and Pacific Islanders. Under Southern Skies was co-curated by the museum’s Head of Indigenous Programs Beau James and Head of Research Dr Stephen Gapps.

“In the past, there has been little recognition of the knowledge and skill of First Peoples in their use of celestial navigation. There has been a tendency to see Western navigation history as the start of the science of navigation. This new exhibition shall show the history and science of Indigenous navigating, the use of Pacific navigation by Western voyagers (eg Tupaia and Cook), as well as the more well-known stories of Dutch, Portuguese, French, Spanish and British navigation, mapping and charting,” said Dr Gapps.

“The title Under Southern Skies reflects what scholars have said about Polynesian navigational techniques in particular; that these were just as advanced if not superior in many ways to Western navigation techniques. The common factor in all Indigenous and Western voyaging around the Pacific and along Australia’s shores was the mapping of the night sky.

Aboriginal astronomers were able to track the way the night sky shifts as their relative latitude would change, understanding the connection between latitude on the ground and declination in the sky, also understanding the curved nature of the planet well before Europeans,” Gapps continued.

From the observation of the transit of Venus, the Polynesian stick star charts to the importance of the night sky in Torres Strait Islander navigation and voyaging, the southern skies have been critical to all voyagers across Oceania over time.

The exhibition contains over 500 objects with several new acquisitions to the national collection on display for the first time.

For the first time on display

Objects from the Batavia shipwreck collection including silver coins, personal items from the infamous mutiny