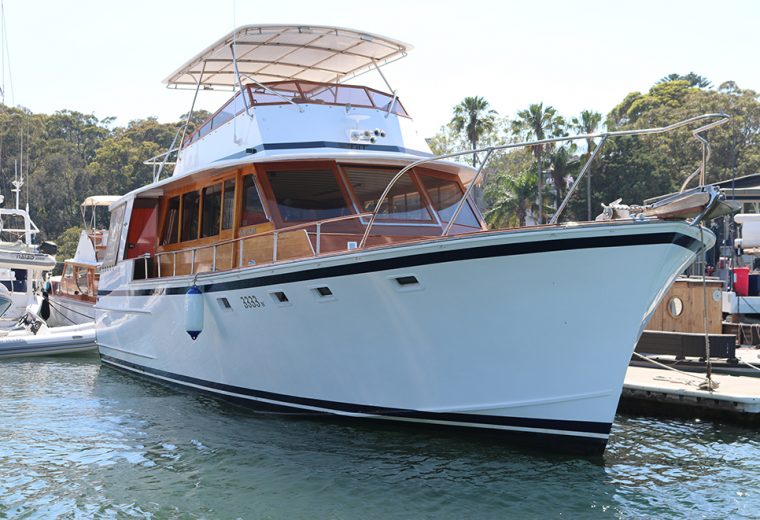 The clean common-rail efficiency of new 6LY440 engines has given one of Sydney’s Halvorsen 1970’s flybridge cruisers an engine room to be proud of, a spritely step under throttle and an owner incredibly happy with his decision to go with Power Equipment’s high tech Yanmar option – story by Mark Timmerman.

Palmyra, a stately Halvorsen 48 flybridge cruiser that has privately entertained on Sydney waterways since its launching in 1973 has recently been fitted with new Yanmar 6LY440 common-rail engines.

These class-leading power-to-weight engines, which are proving incredibly popular across multiple boating sectors with their 324kW (440mhp) @ 3,300rpm, have given Palmyra a 25knot top speed and a comfortable, efficient 18-20knot cruising speed in easy conditions.

And while some older vessels seemingly need to be dragged reluctantly into the 21st century in terms of fitting new technology, this 46-year-old cruiser has taken to her repower like a grand lady stealing the show in front of the Opera House with new dance moves!

Palmyra’s new owner, with a background in marine engineering and superyachts himself, purchased her around 12 months ago and soon discovered through investigations towards a major service and propeller replacement that a repower was the only sensible long-term investment. Old V8 turbo diesels which were struggling to deliver 20 knots at WOT were removed, along with original fuel tanks, running gear and most of what wasn’t hull, bilge or keel in the engine room.

“We literally emptied the engine room, pulled out all the wiring, resealed everything (including all new seacocks) and installed all new running gear as well, including shafts (resized up to two inches),” said Quintin Wakeford of Wakeford Marine Services.

“New skegs and upsized shafts were all part of the refit, and with a different brand of engine going in even a new powder-coated custom steel engine bedding was built and fitted,” he said.

“There was around four months of work on the job itself, and countless hours in planning.”

Quintin credits Yanmars as impressive across multiple facets of their design, but is particularly impressed by the fuel efficiency and warranty available with the 6LY440.

“Yanmar offer a great warranty and I really like the new common-rail injection system on these engines – it’s the latest technology and is far more advanced”.

Yanmar’s new common-rail propulsion units and the beautiful Halvorsen 48 share similar philosophies in some ways too, having kept their core original good design.

The 6LY440 utilises the same famous 6LY2A engine block that has been a favourite of multiple boating sectors for years.

It is a block that has been literally produced in its thousands in the mechanically-controlled version and delivers the benefits of a light weight and a slim, six-in-line configuration that makes engine rooms seem bigger in just about every application.

The 6LY’s dimensions (complete with KMH61A2 gearbox) come in at just under 75 centimetres in width and a little over 1.4 metres in length.

The block is about where the similarities end however on this new generation machine, with pretty much all the components of the 5.8 litre turbocharged engine including injector units, pipework, manifolds and 24-valve cylinder head new to the 6LY440.

They are a direct injection engine, utilising the Denso Common-Rail system, giving some of the cleanest and most efficient diesel power currently available in the world.

With a power-to-weight capability of 1.8:1 (kW per kg) the 6LY440 leaves all of her competitors in her (virtually smokeless) wake.

An interesting and equally impressive characteristic of the 6LY440 is that while power and fuel consumption figures are very lineal in performance, torque peaks come in early (close to 2,000rpm) on the engine’s rev range and are relatively stable even at higher speeds.

Like all of Yanmar’s new technology engines over the last five years, the 6LY440 engine also uses Yanmar’s Vessel Control System (VCS) which is basically a “plug and play” setup offering the option of joystick control if required for low-speed docking and positioning in cooperation with compatible thrusters.

The fully electronically-controlled engines have proven a joy for Palmyra’s new owner, who credits Yanmar’s control system and new engines with giving the vessel a “much better feel and much easier control”.

“There is no shudder going into forward or reverse and the Yanmar gear lever action is just much better,” Palmyra’s proud owner explained.

“To put it simply, she just handles beautiful now since putting the Yanmars in.”

The quiet running of the 6LY440s has also been a pleasant surprise, with Palmyra’s owner explaining that at lower revs “the engine room fans are louder than the engines!”

“She is happy at 8knots and around 1,200rpm on the engines, but I am cruising closer to 18 or 20 knots when conditions allow and the Yanmars are doing that easily.”

Nice figures given the Halvorsen’s 18 tonnes of displacement with 2,000 litres of fuel and around 1,000litres of water onboard.

A KMH61A gearbox with 2.43:1 reduction and four-blade 26inch (diameter) by 24.5inch (pitch) propellers are delivering around 86 per cent load on the engines at WOT – a working load Quintin believes is what recreational vessels in this kind of application should probably be aiming to be in the vicinity of.

“You could push it harder, but it is not necessary with the performance this Halvorsen is achieving from the Yanmars,” Quintin said.

This is an opinion shared by the owner, who says the prop and ratio combination feels right at both dockside and in open water.

Palmyra – a modern classic worthy of her quality upgrade

Palmyra was launched from one of Sydney’s famous Halvorsen stables in August 1973 under the name “Coolong”.

While Halvorsen’s are a popular classic on Sydney waterways, she was one of only a few built at her 48 feet in length.

Designed for entertaining and performance rather than maximum berths, she has only two sleeping cabins but impressive saloon and cockpit lounging areas. Her open space gives the impression of the living room you would find on a vessel nearly 20 feet longer.

With full walk-around decks and expansive flybridge area, she is a true entertainer who certainly holds her own in classic looks amongst multi-million dollar neighbouring vessels at her picturesque Newport marina berth.