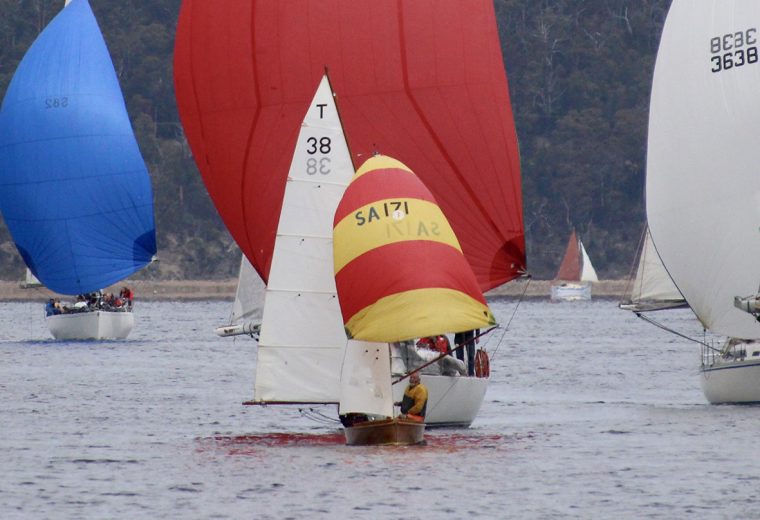 Unfortunately, Barnes Bay Regatta off Bruny Island, the traditional end-of-season semi-social event for the fleet racing out of Hobart clubs over summer has been cancelled because of the Corunavirus.

The Port Cygnet Regatta was first held in 1863 and revived in recent years by the proactive Port Cygnet Sailing Club. It is held over Tasmania’s Eight Hour weekend, March 6, 7 and 8, providing the opportunity for Hobart’s finest yachts to sail south and compete on the d’Entrecasteaux Channel.

The 2020 Regatta series comprised four races and attracted a fleet of near 50 boats, starting on the Friday with day passage races from Port Cygnet and Hobart to Kettering.

This year the Cygnet to Kettering leg was won by Fleetwing, a Farrier F9A (31’) from Port Cygnet Sailing Club, in a record time of 2 hours 5 minutes. The Hobart leg was won by Gretel II of America’s Cup fame, from the Royal Yacht Cub of Tasmania. Incidentally, Gretel II celebrates her 50th year in April 2020.

Weather for this leg was strong with gusty winds to 35 knots from the south. Surprisingly, there were few retirements from both races, however, several yachts experienced shredded headsails with one capsizing, fortunately quickly righted. (Catherine M).

Saturday saw the combined fleet of 48 boats on the start line off Kettering for a race back to Port Cygnet.

Mother nature decided to play her hand just as the start gun fired. She slammed a rain squall up the d’Entrecasteaux Channel into the fleet, dumping heavy rain and winds of up to 30 knots into the sailor’s faces.

Once the squall passed through the fleet the yachts experienced numerous holes until rounding Huon Island.

The Regatta Race Control decided to shorten the course at Cygnet Point which allowed all competitors a pleasant spinnaker run up the Huon River in a freshening southerly to the finish.

The Kettering to Cygnet race was won by RQSIX a Farr 36’, crossing the line with a finish time of 15 hours, 32 minutes.

Sunday morning, the day of the Port Cygnet Regatta, dawned grey and calm. Organisers had worried looks on their faces, however, the good-weather gods didn’t let them down.

Port Cygnet turned on a sight for sore eyes with a mixed fleet of 46 hot racers mixing with graceful classics most of which, because of the light conditions, carried colourful spinnakers.

The grand prize for Overall Regatta winner, with the best point score from all races, was RAD, a rewarding result for Mackay and his crew after being dismasted in a gale in the 2018 Launceston to Hobart race.

The packed Clubhouse was then treated to Port Cygnet hospitality that included numerous re-runs of the races over great food and liquid refreshment, with an invitation to come back and do it again next year.

Complete details of competitors, their times and positions in each race:  www.cygnetsailing.org.au/home/

By  Jeff Rowe and Peter Campbell