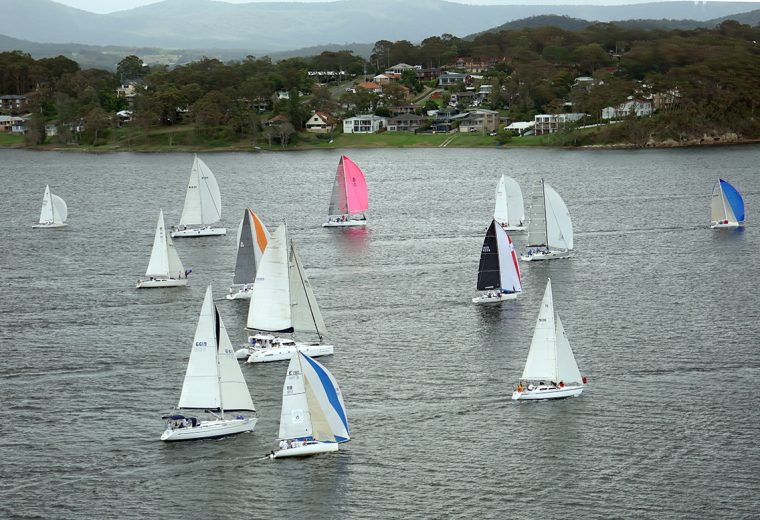 The Heaven Can Wait Charity Sailing Regatta (HCW) – organised and run by the Royal Motor yacht Club Toronto, has posted a new fundraising record in support of the Hunter Branch of Cancer Council NSW and their Home Help Program and Lake Macquarie Marine Rescue. The regatta held over the weekend of February 22-23, 2020, had 55 boats registered to compete and raised $46,000 – overtaking the record set in 2018.

“2020 was expected to be a tough year for fundraising” said Mel Steiner – HCW Race Director and Vice Commodore of the Royal Motor Yacht Club Toronto. He went on to say “bush fires and droughts had sucked up a lot of the available charity dollars and combined with the view that people were doing it tough, we fully expected the fundraising effort to be down on previous years.”

The HCW offers up some unique sailing whether it be the Classic One Lap Dash – a quick jaunt around the cans covering the length and breadth of the lake, or the 24 Hour Endurance race – over the same course but overnight and with whatever the weather chooses to throw at you.

HCW is the centre piece of Lakefest – a celebration of aquatic and land based activities on and around Lake Macquarie. In addition to HCW, Lakefest 2020 featured the Etchell Australian championships and the Australian Sport Boat Championships – both of these events attracting boats and crews from interstate, Interclub yacht racing, a Classic Boat festival at Rathmines, a combined Friday Twilight race and a Pretty In Pink Charity Ball.

The HCW Charity Dinner is a regular fundraising event on the HCW calendar – held on the Friday night before the regatta proper, and traditionally featuring as guests, local yachting personalities who have performed well on the world stage being interviewed by well known ABC Newcastle Sports commentator Helene O’Neil. Mr Steiner said, “this year, we wanted to put the focus on women sailors because sailing is a sport that both women and men can participate equally in – either separately or in mixed formats and we want to see more women sailing’. The Charity Dinner featured a panel of 5 women – three of whom competed in their first Hobart in 2019 and one with 14 Hobart’s to her name. All – as a panel, were interviewed by Helene”. Mr Steiner went on to say “I want to see an all women crew racing with us in our mid week and weekend race series. In the 2020 HCW, we had another first – an all women crew competing and I applaud their participation.”

Dates for the 2021 HCW – the 15th anniversary, will be announced shortly but expected to be around the same time in February.

More information about HCW (results, photos, etc.) and Lakefest can be found at www.heavencanwait.com.au or www.rmyctoronto.com.au/heaven-can-wait and www.lakefest.com.au.