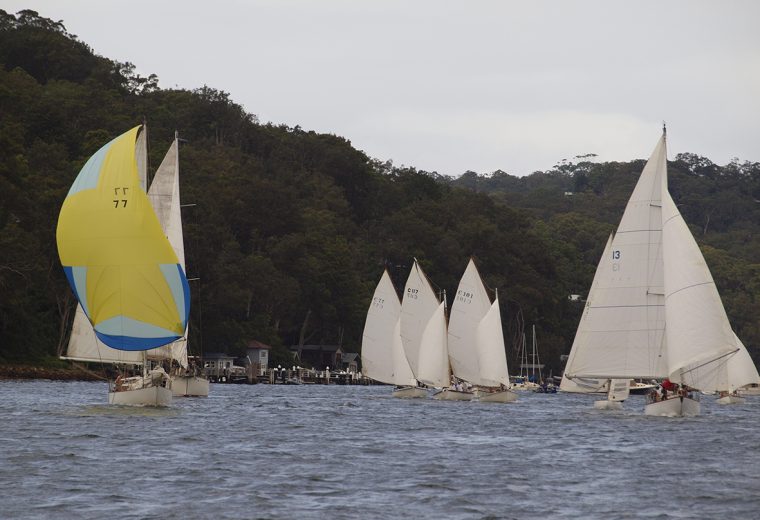 Sixteen beautiful classic yachts took to the magnificent waters of Pittwater over the weekend of 7th and 8th March. The fleet comprised 4 Division A (spinnaker), 6 Division B (non spinnaker) and 5 Couta boats plus a Ranger making up Division C.

Pittwater put on a sparkling Saturday morning for the starts at 11:00. The forecast was for a south easter of around 10-15 kts. With two separate start lines, the yachts sailed two ‘around the cans’ courses while the Coutas/Ranger sailed two windward/leeward courses.

As expected there was close racing between the ‘one design’ fleet in Division C. After starting from around Soldiers Point on their first windward leg the yachts looked spectacular with their huge gaff rigged mainsails and booms extending beyond the transom and jibs flying from long curved bow sprits, they appeared to double their length overall.

However, in Race 1 the fickle nature of Pittwater made it difficult to pick the correct side of the course to sail. With the fleet splitting it was Cariad that led all the way while the rest of the Pittwater Couta fleet showed the three boats from the Harbour – two Coutas, Eloise and Makama, and the Ranger, Cherub, the way around the course.

Handicap results for race 1 were Cariad, Eloise and Wattle, in the top three places; a great result for Wattle having been built in 1928 and still showing she has the pace.

Race 2 in Division C again had Cariad out in the lead by almost four minutes while Wattle and Eloise, finishing second and third, were separated by just one second.  On handicap however, Eloise was in second place just four seconds behind Cariad with Wattle again finishing third – close racing indeed!

In Race 1, the Division A and B Yachts had a combined downwind reaching start from a line laid just north of the Club. The course would take them from the Start to RP(S), MB(P), SP(P) to finish at Mackerel Beach.

The fleet was bunched on the approach to Rocky in the lee of Scotland Island. The grand lady Caprice of Huon looking magnificent with acres of sail up, sailed serenely by out wide of the island’s wind shadow outpacing the fleet and rounded first.

However, it was the 5.5 metre, Skagerak (Div A) that sprinted away on the downwind spinnaker run to Mackerel to be first around the mark with Fare Thee Well, Mister Christian and Anitra V in hot pursuit.

In Division B Antares was keeping pace with the spinnaker fleet. Caprice was nearby and threatening.

At the finish, Skagerak was first over the line by at least 5 minutes followed by Fare Thee Well, 3 seconds ahead of Antares then came Mister Christian, Anitra V and Caprice of Huon, all within 2 or 3 minutes.

Race 2 started soon after the last boat finishing Race 1, starting from Mackerel Beach, TP(S), SP(P) to finish off the club.

The wind had built to a good 18/20 kts south easterly providing a good brisk up wind first leg. Again Skagerak showed her pedigree but Fare Thee Well with her windward ability was well placed. However, Caprice, who had been out to the west as the fleet went east, literally came out of left field to round Tailors in second place.

From there it was a spinnaker run back to Stokes and at the rounding Skagerak led. Fare Thee Well found a tighter inside line to narrowly pass Caprice. This match race went all the way to the line with Fare Thee Well snatching defeat from the jaws of victory when the final tack for the pin end went terribly wrong and Caprice caught Fare Thee Well out on Port tack, to cross 10 seconds ahead.

Sunday started with a drab, overcast morning. Overnight rain slowly cleared and it was partially cloudy but dry by the start of Race 3 at 11:00. With a course set out around Lion Island, wind, or lack of it, was the issue. A South east zephyr of 5 to 6 kts made the first leg around Stokes (P) and on across Broken Bay a very long haul.

Spinnakers were readied and hoisted as the fleet crossed the line indicated that crews were taking things seriously! Mister Christian won the start and set off with Skagerak in hot pursuit. Anitra V was next up with Fare Thee Well. Whilst the small spinnaker fleet added some colour to proceedings, the grand lady Caprice of Huon set a spectacularly huge polled out genoa and was keeping the Division A boats honest. Mother Goose looked impressive with her Cutter Rig setting two headsails.

Division C, started with the fleet but then went on to sail an inshore course, SP(P), RP, SP(P) to finish, looked suitably ‘Classic’ and were fast downwind with their large sail area.

For the Coutas/Ranger on their second leg the lack of wind in the lee of Scotland Island played havoc with the fleet at the Rocky Point mark with a becalmed Sylvia in second place being passed by most of the rest of the fleet. Again, Cariad found the best winds and finished first almost three and a half minutes ahead of Eloise. 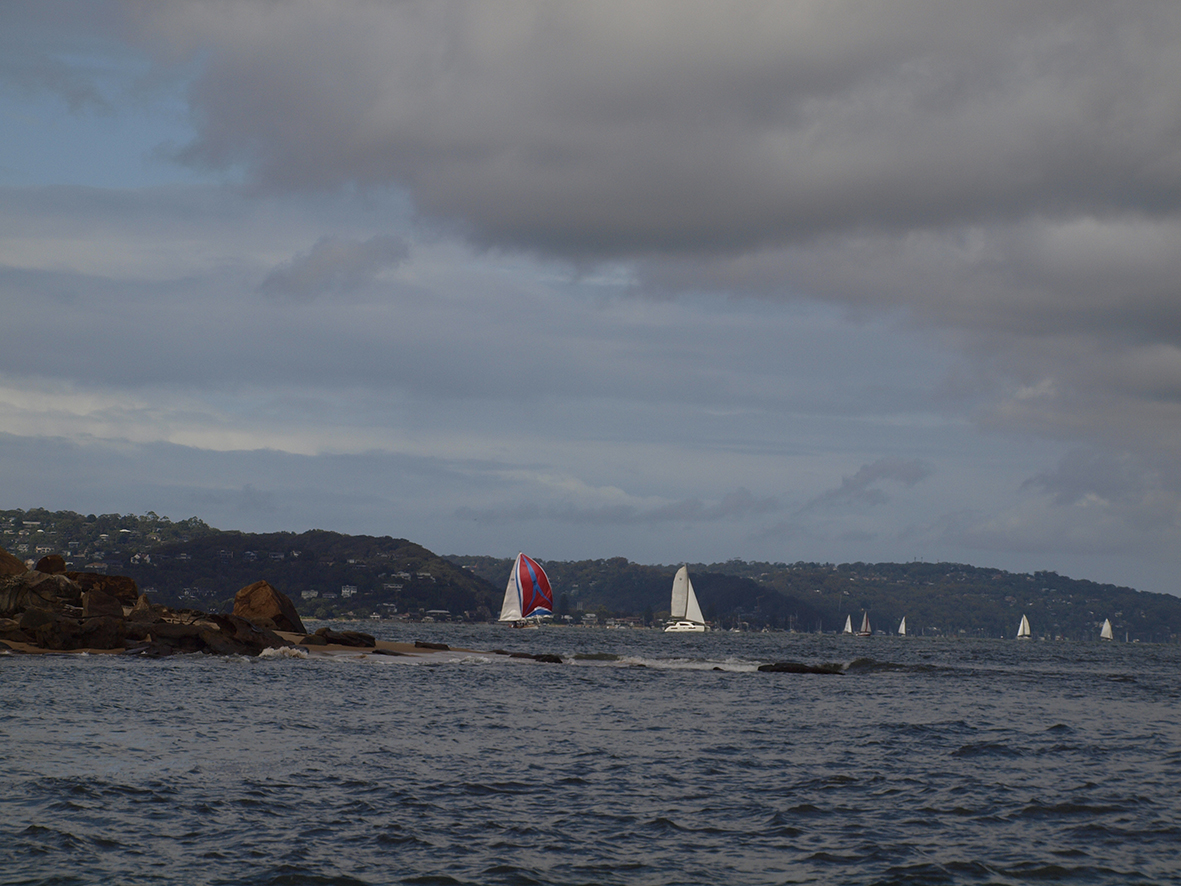 Meanwhile Divisions A & B, across at Lion Island, which could be rounded in either direction – quite a novelty for the visiting boats from Sydney – a strong outgoing tide made for a very lumpy sea and the recent rains meant large patches of debris in the water. Some branches were the size of telegraph poles!

The Spinnaker fleet found it hard going downwind in 4 to 5 kts. Skagerak gibing downwind again talking the lead, followed by Mister Christian a country mile ahead of Anitra V and Fare Thee Well – who had made a very mediocre start and was struggling to keep up.

For the boats leaving Lion Island to starboard, the outgoing tide over the reef on the west of the island proved hazardous. Anitra V feared being washed onto the reef and briefly started her engine to get to safety, exonerating later with a 360 turn.

After rounding Lion Island, Mister Christian, Anitra V and Caprice sailed the prevailing southerly towards West Head. Skagerak was so far in front I have no idea of her course. Fare Thee Well continued fronting a lumpy swell to seaward. Luck was on her side as the wind shifted more East and strengthened to 15 to 18 kts. Tacking on the lift, Fare Thee Well was able to sail along the eastern shore leaving the rest of Division A to leeward, on the western side.

Catching and a tacking duel with Mister Christian a highlight to remember.

Skagerak crossed the line way out in front of the whole fleet, Caprice and the other lithe 5.5 Antares were next with Fare Thee Well, Mister Christian and Anitra V rounding out Division A.

However as is often the case, the Handicapper had the final say on the results. They were close!

In Division A, Skagerak and Fare Thee Well ended with equal 5 points and Skagerak was awarded first on a count back. Mister Christian and Anitra V rounded out the finishers.

In Division B, Caprice of Huon took the spoils and the pretty little 29-footer Radiant from Sydney harbour took second with Antares third.

In Division C, the boats from the harbour were the winners with Eloise and Makama from RPEYC being the first Couta boats home and the Ranger, Cherub from SASC taking out third place. However, the series win went to Cariad with Eloise and Cherub in second and third places.

These events can’t happen without the organisation behind them. Many thanks must go to the RO’s, John Woods and Wren English and their loyal bunch of volunteers. They set good courses for each of the fleets from two start lines. 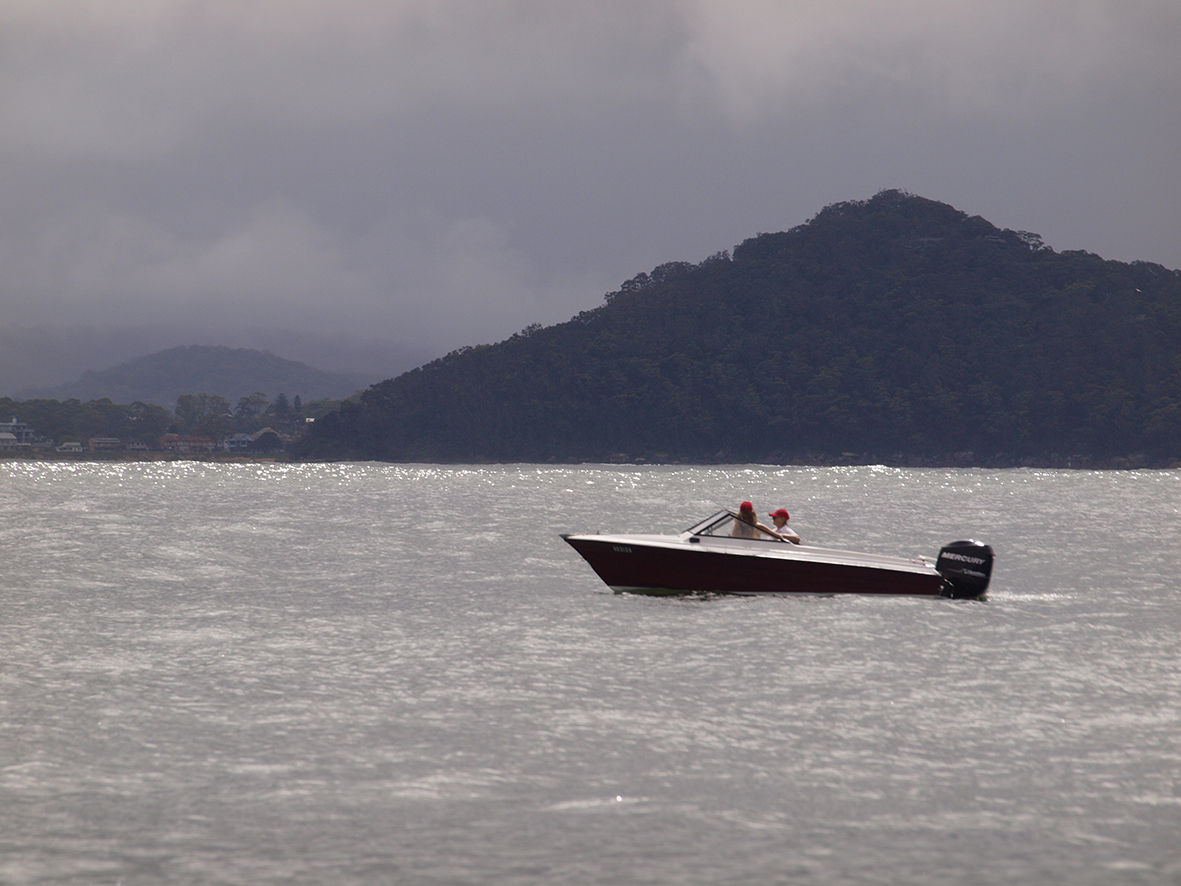 However the person who should take greatest credit is Jaz Rowntree. Nothing much happens in RMYC sail racing without her tireless support. From corralling competitors, organising sponsorships and prizes, events promotion, regatta documentation, to crewing the camera boat on the day, we thank her for her support.

On the subject of Sponsors thanks must go to Oricom, Musto and Wild Oats wines for their generous support and valuable prizes.

And lastly of course the competitors. From observation and comments I gather you all enjoyed yourselves. It was pleasing to see the contingent from Sydney making good use of the RMYC’s offer of free berthing on the Saturday night. That led to a convivial gathering over drinks and dinner.

Please tell your friends and fellow yachties how much fun you had and let’s do it bigger and better again next year!