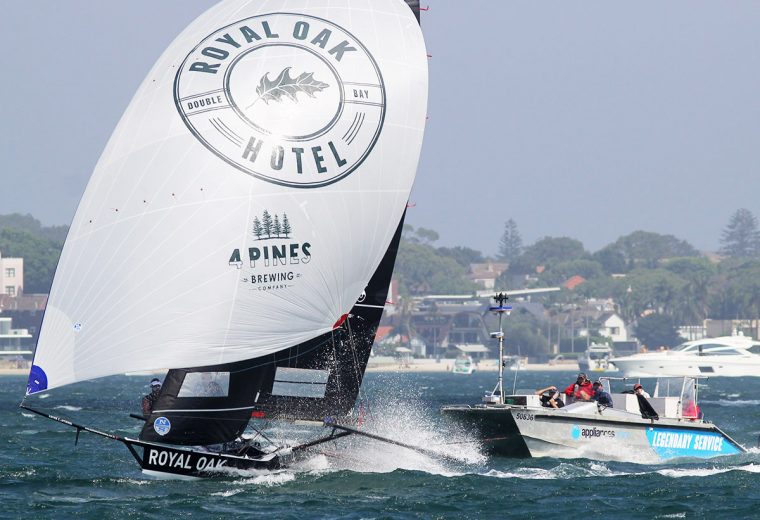 When the world’s top twenty-four 18ft Skiffs line up to contest the 2020 JJ Giltinan Championship on Sydney Harbour, from 14-22 March, the AeroMedia Live Broadcast team will be alongside and above the fleet sending vision of the action to all parts of the world.

The team covers the Australian 18 Footers League’s weekly 18ft Skiff races on Sydney Harbour and is highly experienced in how to follow the fleet, communicate with the viewers, and how to avoid the incredible number of difficulties associated with the production on a busy harbour.

For the 2020 JJs, the team will use five 1080HD quality cameras, including one in the boat park for interviews, by Troy Tindall, and to show the boat set ups.

Their efforts allow viewers around the world to be taken up close to the racing skiffs as they speed across the harbour, while managing to avoid the heavy commercial and private traffic.

Team members are also quick to point out: “Our coverage is absolutely live, as it happens, in the moment.”

“We are in the elements and not commentating from a comfortable studio.”

According to the video team producer, Michael Chittenden, producing livestream video of the racing on Sydney Harbour is far from a simple matter.

“Our equipment is generally foolproof, but things, like the weather, are out of our hands.  Will we be able to keep our power cables and leads dry when it rains, or when we have to go through the wake of power boats?”

“We always wonder, is the equipment going to work, will the signal from the drone work, or will the interference, common on Sydney Harbour, cause problems?”

Chittenden added: “We also worry about how we will be able to get the camera boat into the right places, and at the right times, as we try to cover as much of the fleet and the racing as possible.”

“It’s a fine line between a good race and one that is not so good, but most times things work out.”

“There’s a lot which can go wrong.  We have three on-board cameras, a drone, live commentary, a boat park camera and graphics.

With three commentators, a driver/commentator, a ronin operator, a drone pilot and Michael Chittenden directing the show, there’s a lot going on as the small camera boat manoeuvres her way through the traffic to bring all the action to viewers around the world.

With so much ‘happening’ in a small area on board the camera cat, and at the speed necessary to cover the action of 18ft Skiff Racing, the team’s efforts are amazing so that we can enjoy the thrills associated with the flying machines.