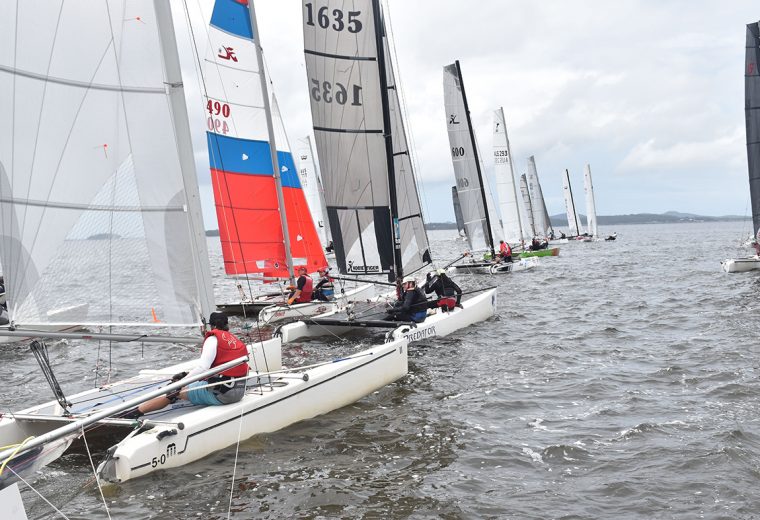 Good racing conditions for Tanilba Bay’s Big Boat Regatta saw 30 boats on the waters of Port Stephens over the weekend of 15th and 16th February.

Race Officials Peter and Steve Breaden aboard the MV Dynasty were able to start seven races over the two days.

The Mixed cats division was won by John and Bronte Forbes on the Hobie 18 18@Heart with Peter Goldie on Legs11 (Mari5m) second and Steve Ramsden’s 4.9m Taipan CrackerJack third.

Placings in the Mixed Spinnaker division were first to the NACRA20 of Brett White and Ethan McAllaff on Thunderbolt, ahead of the Tornadoes of Nick Hord and Georgia Davis’ Monkey Boy and Michael Cook and Benny Leslie’s colourful WildThing.

The F18 section of Tanilba Bay’s Big Boat Regatta was fiercely contested with four teams making it onto the podium.

Danial and Nathan’s SendItSailing took the honours from Tristan and Beau White on Makhulm.

The judges couldn’t split third placed crews, so honours were shared by local boys Sam and Zac and popular couple Kerrie and Andrew.

Thank you everyone for attending and showing good humour and sportsmanship and thanks to Harken Australia and Coastal Real Estate for sponsorship of this popular event.