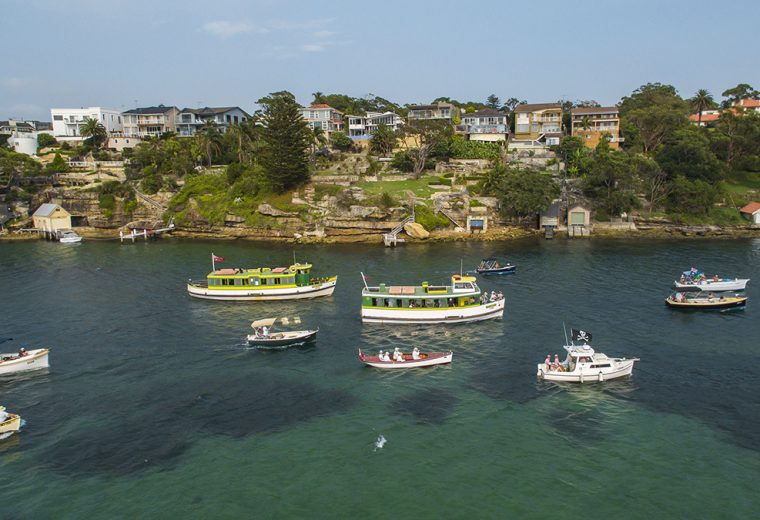 Over 50 Putt-Putt, Classic and Wooden vessels gathered in February to celebrate the history of boating on Port Hacking and help raise awareness about boating safety, particularly ‘Logging On’ with Marine Rescue NSW.

James Glissan ESM, QC and Board Chair of MRNSW rang the bell to send off the colourful Parade of Vessels who navigated around the bays from Hungry Point to Lilli Pilli Point.

Spectators watched on from the iconic Tom Thumb III and prominent vantage points to enjoy the flotilla of classic vessels.

Of a number of category awards handed out on the day “Little Prince” received the coveted Heritage Award.

“Little Prince was a deserving winner of our Heritage Award in 2020. It has been lovingly restored and was skippered on the day with the owner’s boys who were also wearing their correct safety gear, aligning to our key partnership with Marine Rescue NSW” said Brad Whittaker, Commodore of the Port Hacking Putters.

The origins of Little Prince are unknown, although it is thought to have been built in the 1950s. During the 80s and 90s it was owned by radio presenter John Laws who had a Halvorsen Cruiser named Princess Never Fail and as the cruisers tender it was named Little Prince.

It was sold by John in the late 90s and ended up on a mooring at Double Bay where it sat for a number of years slowly deteriorating. In 2002 Wal and Chris McCadames purchased (rescued) Little Prince and went to work undertaking a major restoration including re-powering with the current engine – a single cylinder Blaxland Pup. The boat then passed through a couple of owners and was sold again in April 2017 as the owners Mark and Judy Esdaile were upgrading to a larger boat Miss Fisher (powered by a Blaxland twin).

Anthony Jack, the new owner, full of enthusiasm and rather naïve to the ways of wooden boats, decided to give it a ‘quick freshen up’ before the 2017 Davistown Putt-Putt Regatta. So one Saturday afternoon some of his mates came around for a few beers and rolled the boat over. The sides were stripped back to timber and the underside sanded to the fibreglass sheathing. At this stage they realised the renovation timeframe was a little optimistic.  Eventually the fibreglass was repaired and keel rebuilt at the stern. The exposed timber was treated, clinker planks caulked and edges re-shaped.  The undercoating, sanding and fairing process went on for six months. The last piece of the internal teak lining was finally re-installed in August 2019 and that ‘quick freshen up’ was complete.

“During this process there were a number of people who helped the owners out: Wal McCadames spent time with me discussing the boat and his restoration work; Brett Mould from Norglass Paints was there with advice from start to finish; Boyd Myers took me under his wing answering questions on all things Blaxland and my wife Alison showed a fair bit of understanding and patience” acknowledged the current owner Anthony Jack.

With the support of the event’s presenting partners and numerous local marine related businesses, the Port Hacking Putters Regatta is becoming one of the area’s most iconic maritime events. It is held annually on the first Sunday in February and is a free community event.