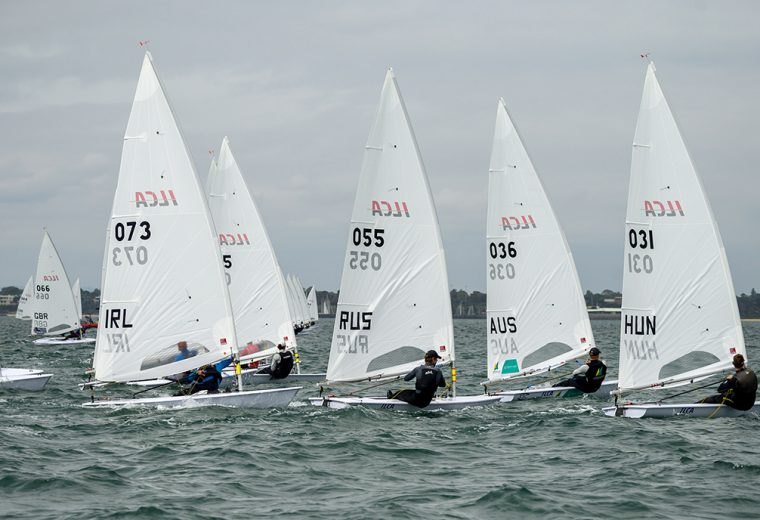 “It was nice to just get through the first day,” Finn Said after racing.  “I wasn’t looking for anything really special but to get away from the first day unscathed is sort of the key for these long series.  Consistency through the regatta was really all I was aiming for and to come away with a good result means I can sleep a happy man tonight.”

Competitors were held ashore for over an hour while the race committee waited for wind to fill in on the course.  Wind arrived just before three pm from the South with ten to 15 knots shifting throughout racing.

“It was pretty patchy and puffy with some reasonably big shifts,” said Australia’s representative for the Tokyo 2020 Games Matt Wearn.  Matt is sitting in tenth overall after placing sixth and fourth.  “It was a nice day sailing and the waves were starting to pick up towards the end so it was good fun.”

Luke Elliott (ASS) is placed seventh overall after placing third and sixth in the Red Fleet.  “Melbourne is one of the hardest places to prepare for because it throws up anything and everything,” said Luke.  “We’ve had a long summer in Melbourne prepping for this event.  It’s my first worlds on Australian waters so I’m very excited.”

Mitchell Kennedy (ASS) sits in 28th overall after what he called a tricky day.  “It wasn’t a straight forward day but I’m happy with how I started the event.”

Defending World Champion Tom Burton finished the first day in 28th overall.  “There have been a few speed bumps along the way,” Tom said of his event preparation.  “I got food poisoning and I’ve got a few injuries so I’m getting sticky taped back together most days and we’ll see what these six days bring.”