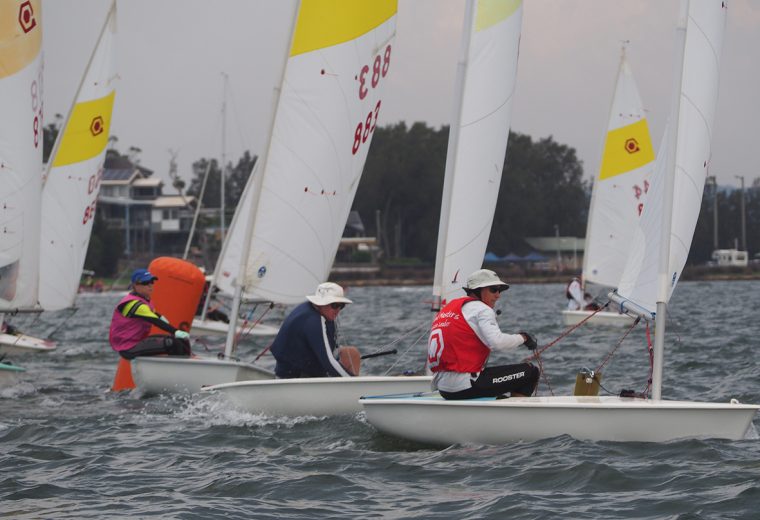 The annual Spiral Nationals over the Australia Day Long weekend were hard fought at all levels by thirty competitors sailing a wonderful regatta at the Saratoga Sailing Club. The overall lead changed each day of the three day regatta and there were five different winners of the nine heats, so close was the competition. Additionally the lead of the Grand Masters, Ladies and Great Grand Masters changed through the regatta.

Saratoga Sailing Club did a superb job of running the event with excellent courses and race management on the water despite shifting breezes, and great on shore work particularly for the Spiral Clan dinner, and the breakfasts and lunches for the large band of campers in the club grounds.

Jonathon Talbot managed to win four heats and take out the overall winner as well as the Grand Masters division from Grahame Tindall with two heat wins.  Maria Nash aided by a heat win took out the Ladies, Shane Conly won the Seniors, and reigning States titleholder Tim Vandervoort was successful in the Masters, and won the last race. Henry Zylmans came through to take the Great Grand Masters after a tussle with Bill Jauncey, despite Bill winning the third race, and Jason Milburn and David McLean were the big improvers over the series to win the handicap. However all the competitors agreed over eats and drinks at the presentation that all who sailed were winners in such a good event.

The Spiral States will be at Jervis Bay 7-8 March and the 4.5 division Nationals will be at Oak Flats the following weekend.