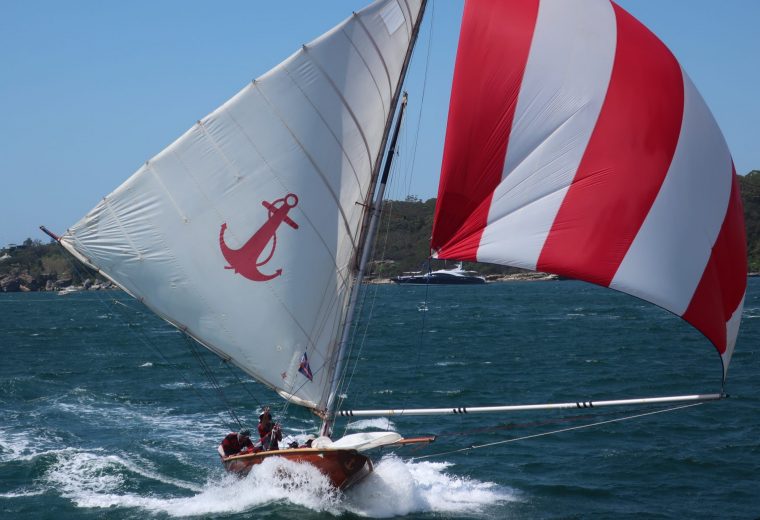 Race 3, Yendys, preparing to gybe at wing mark. Great view of the action for those on the spectator ferry, but nerve wracking situation for the crew of Yendys to negotiate the ferry wash.

The 2020 Historic 18 Footer Australian Championship for the Galloping Ghost Trophy was conducted by the Sydney Flying Squadron in conjunction with the Australian Historical Sailing Skiff Association (AHSSA), on Sydney Harbour over 3 races on 18, 25 January and 1 February.

Nine skiffs out of a possible eleven (twelve if you count the skiff in Brisbane) were on hand to contest this event with the fleet in good shape following a number of hull and equipment upgrades during the off-season along with some re-assignment of boats and crews, with John Winning sailing The Mistake this season and Jerry Tickner’s team on last year’s champion Aberdare. Irish sailing legend Harold Cudmore was back at the helm of his favourite piece of Australian cedar, Yendys complete with new mast, bumpkin and the odd new sail. Conditions varied over the three races allowing the use of small, medium and big rigs. The Mistake finished the series on 4pts, from Britannia on 13 pts and Top Weight and Australia IV on 14 pts, then Yendys on 15 pts after a capsize whilst in the lead at the 2nd last mark of the final race.

Race 1 started in a moderate southerly that later filled-in as expected with most skiffs carrying intermediate rigs. Yendys moved into the lead on the first windward leg to round first at Clark Island with The Mistake moving into the lead on the square run to Chowder Bay as the breeze filled-in from the SSW. The two lead skiffs remained in close touch on the next windward leg to Shark Island where The Mistake rounded just ahead for a boat-on-boat main & jib reach back to Kirribilli, with The Mistake extending their lead before rounding the mark at Kirribilli for the beat to Clark Island. Yendys closed on The Mistake as they approached the island.

The Mistake was first to round the island for the run back to the finish, but Yendys gybed first to take the inside position, set a peak-head reaching spinnaker and move into the lead. The Mistake set a small mast-head spinnaker for the expected tight reach to hold a higher course while Yendys fell away when the fresh puffs hit. The Mistake moved back into the lead and held it to the finish to win by 30 sec from Yendys then a gap to a close finish for Australia IV, Top Weight, Aberdare and Britannia, then Tangalooma and Scot.

Race 2 sailed in a light easterly under big rigs. After a well contested start off Kurraba Point, Yendys sailed clear to lead the way up to Shark Island to round first with a good lead from The Mistake for the long run back to Kurraba, with big spinnakers and ringtails a popular choice down this run. Yendys was in their element in the displacement mode conditions, extending their lead at each mark to dominate this race and finish with a 6 min margin from The Mistake, then Alruth, Australia IV, Aberdare, Scot, Britannia, Top Weight and Tangalooma.

Race 3, deciding race, sailed in a fresh nor’easter and bumpy harbour joggle, with reefed intermediate rigs the popular choice. Yendys nailed the start at the boat-end to power away, sailing high and fast, with The Mistake also sailing well but unable to match Yendys for height. Yendys rounded the Beashel Buoy with a good lead from The Mistake, Aberdare, Alruth, Top Weight, Australia IV, Britannia, Scot and Tangalooma. The skiffs enjoyed a fast ride on the square run to the wing mark off Clark Island with The Mistake making up time on Yendys as they approached the mark where the real concern for Yendys was the proximity of the spectator ferry (and its wake) as they prepared to gybe.

Both skiffs got through the gybe unscathed and after getting set for the next run enjoyed a fast ride but no hope of holding up to course to make the bottom mark. Yendys was first to go for the early spinnaker drop with The Mistake holding on a touch longer to overtake before their drop, a treacherous task for both crews in the short steep seas with both skiffs shipping green water.

When the skiffs were able to come up to course to round the mark The Mistake had edged ahead to lead the way up the final beat to Chowder Bay with both crews busy on the pumps and buckets. The Mistake held their lead upwind but the final approach to the mark involved negotiating a lee with swirling and erratic gusts coming off the shore, where Yendys gained the upper hand to round first for the run to Clark Island with The Mistake close behind. As Yendys turned downwind for a spinnaker set, a nasty gust coupled with a fouled backstay had them roll the leeward gunwale under to the point of no return, ending their race.

The Mistake then sailed conservatively for the last two downwind legs to take the gun by nearly 9 mins from Alruth, Australia IV, Top Weight, Britannia, Scot and Tangalooma, with Aberdare another victim of the Chowder Bay mark.