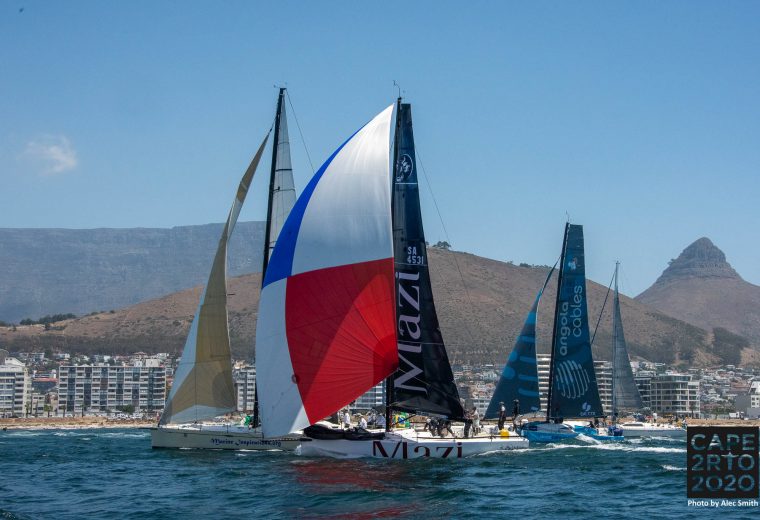 With the First Start cruisers a week into the much revered Cape2Rio 2020 yacht race and by now all firmly set with bow to final destination, it was time to unleash the serious racers and record chasers into the competition.

The day started with the Mother City cloaked in fog, but as soon as the sun lifted it cleared to be another perfect day with a cloudless sky and gently blowing breeze.

Representing 5 continents and 10 countries, the crew of the seven monohulls and two trimarans gathered at the Royal Cape Yacht Club (RCYC) on Saturday 11th January 2020 at 10:00 for the big send off.

Media, television channels, sponsors, friends and family enthusiastically collected in support as the teams added final touches and made last minute tweaks, while setting their minds to the task ahead. The atmosphere was different to that of the week before, more serious and focussed, with a relaxed confidence befitting these seasoned competitors.

Club Commodore Neil Gregory welcomed all before Race Chairman Luke Scott called up the Skippers to introduce their crews. Most participants were met by cheers from those that had travelled far to be there, and those that had come to enjoy having them at the RCYC.

The final word was from Deputy Mayor Ian Neilson who touched on the significance of the Cape2Rio yacht race to the Cape Town events calendar, and how the city has proudly supported the endeavour that has linked two of the world’s most beautiful port cities since its inauguration in 1971.

He commended the RCYC, the race organisers and the #Sail4Good initiative which not only limits the environmental impact of the race, but creates awareness surrounding plastic pollution while supporting social upliftment and youth development. Pointing out that the Cape2Rio race only exists because of the ongoing enthusiasm, passion and efforts of the RCYC.

‘May the passage be safe and the teams arrive with all the personal rewards that such an adventure brings. May there only be favourable winds for the duration of the race,’ he concluded.

Padre Tony Bethka offered a blessing to the fleet. This is the fifth time that he is seeing off the brave men and women that chase the personal satisfaction of competing in this iconic South Atlantic ocean crossing.

Personal goodbyes were heartfelt, not only for loved ones, but for club members, hosts and newly made friends who’d enjoyed the pleasure of getting to know many of the crew members during their time in the city as they prepared for the voyage.

There was a strong underlying message of appreciation from all the teams, not only for Cape Town’s warm hospitality, but for the people who’d supported them during their stay. With special praise of the RCYC and Luke Scott for all his work in organising the race and fine-tuning the logistics.

Formalities aside, it was time for Anjo, Saravah, Mussulo 40 – Team Angolan Cables, Haspa Hamburg, Ballyhoo Too and Zulu Girl powered by Mazi Asset Management, to make their way to Table Bay where they were joined by Almagores II, and the two big multihulls ‘Maserati’ and ‘Love Water’. After a sail past at Quay 4 and Quay 6 at the V&A Waterfront, they raised their sails and took up position just off shore in anticipation of the final countdown.

There were over 100 boats carrying excited spectators and supporters on the water, chasing the waves and the competitors. All the while the helicopter following Maserati hovered overhead and the drones intercepted each other in a bid to get the best shot. 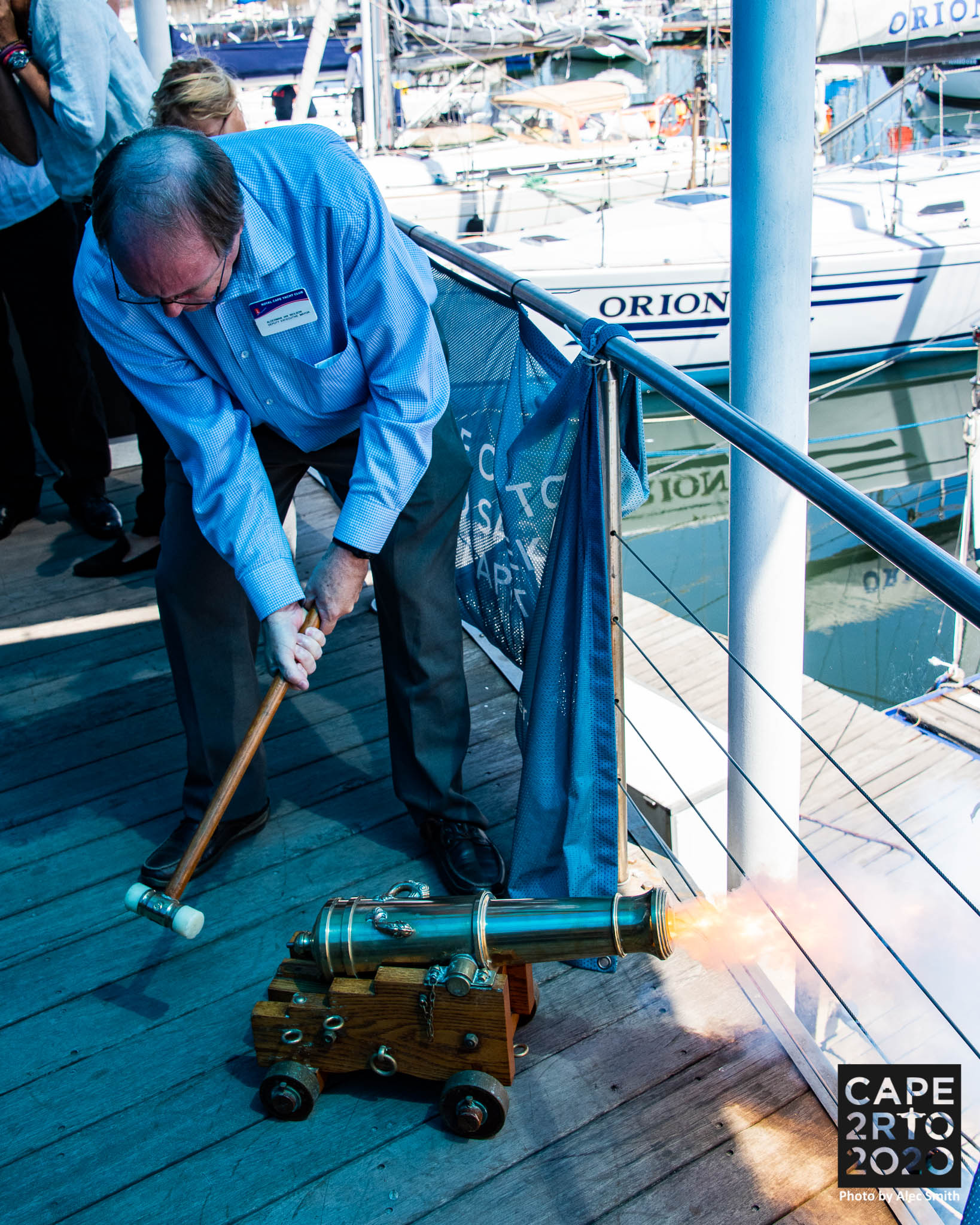 At 14:00 the horn blew and the first seven boats harnessed the increased wind and took to the open sea, sailing from the marker off Mouille Point Light House towards Woodbridge, and from there North and onwards.

It was then back to the marker for the countdown to 14:30 to see off the two trimarans.

In the hour leading up to this, the Italian Maserati crew had suffered damages to a hydraulic piston that manages the foil system on the boat and had needed to make emergency repairs, leading to their arriving late and making an error at the start.

All the while Love Water was off and starting to gain miles, with Giovanni Soldini and his crew forced to join the chase from behind, with the hope of making up the lost time.

Amazingly within 24 hours both trimarans had flown up the West Coast and were already veering towards Rio. A full moon shone bright on their first night, making for a sublime start for the teams. Next stop – Rio de Janeiro.

Track their progress and keep in touch as we share regular updates from the skippers and crews as we follow their race to Iate Clube do Rio de Janeiro, with daily leaderboards and news from the Atlantic on cape2rio2020.com/. Connect with us on Instagram and Facebook and support the significant #Sail4Good fundraising efforts.

Safe sailing to all – may the best team win!