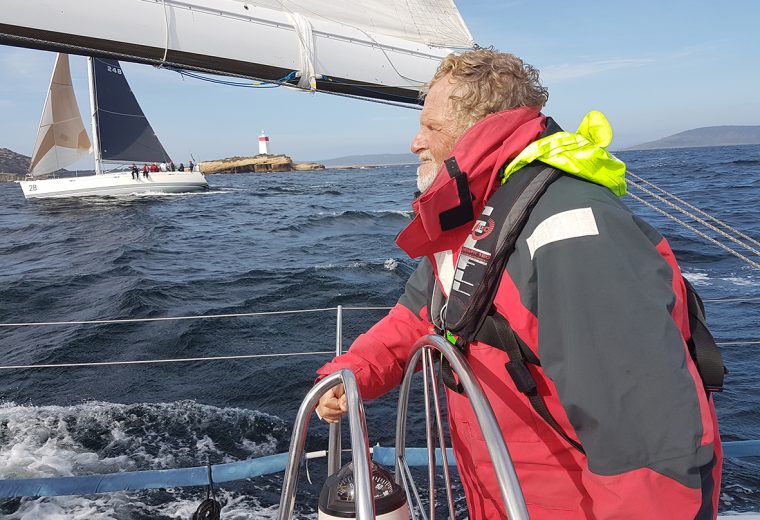 Twenty-five years ago, a bunch of men and women sat in a pub in Hobart town, looking back on the adventures of 1994 and what had been achieved. Remembering the 60 knot SW gales from the Sydney to Gold Coast race, the surprise of the south east trades in the Mooloolaba to Airlie race and then the Lord Howe island ocean race all leading up to the 50th Sydney to Hobart in 1994. There were so many firsts that year.

Sitting in the airport my mind wanders back to those intervening 25 years and of the race just completed. Its probably a good time to have a review of SWD achievements to date. Like I said 1994 had many firsts, our next challenge came in 1998 when 90 knot cyclonic winds tested our crews metal. That team, a 12 year old dyslexic kid Travis, a blind guy from Victoria, Kym an amputee, Harold a deaf guy, Danny stroke victim and Abs and newbies… the seamanship this crew displayed in that race was typical of the standard set, the success due to significant training programs. Setting the world record in 2003 for the circumnavigation of Australia non-stop and unassisted, seven disabled sailors breaking the former record by six days.

The success of this was due to planning, commitment and the idea that we had to take on the Southern Ocean in the middle of winter, because we needed the SE trades to get over the top. So when people talk about the southern ocean and deeds of do, it was an SWD crew that accepted the Southern ocean on its terms and dealt with it. In conjunction with our racing program we have developed inclusive sailing programs that range from Mackay to Hobart, a base in Melbourne and Sydney, creating the opportunity for beginners that have never sailed before to developing the possibility of joining our team in  the Sydney to Hobart or perhaps just experiencing the wind, the movement of the yacht and sharing it with your friends. 12 months ago we restored a wooden boat with a group of trainees and took it to the Australian Wooden Boat Festival in Hobart, another first.

2019 will certainly not go down as our greatest Sydney to Hobart or maybe it will. How do you measure success from an SWD perspective?

Obviously as a yachtsman going fast and getting on the dais is a good thing. From an SWD perspective this may well have been one of my best Hobarts. We tried something new, which is what SWD does. So what was the 2019 race like? It’s kind of funny about big races they seem to take forever to get to the 10 minute gun, there is conversation about the right or left and of the harbour, four start lines, just get the boat out of the heads and away. This year it was quite a chaotic affair with the Nor’easter, multiple rounding marks to identify, we all found ourselves stacked on the left hand side of the race course. I don’t think I have heard so many water calls in a big race before.

Six boats on starboard and the leeward boat calls water! Six boats tack onto port in unison, I didn’t think much of it at the time, but it was pretty cool!

Clear the ocean mark and head to Hobart. You could feel the tension as the boat turned to Van Diemen’s land. The newbies wondering what would become of us our first night at sea. We set a hound’s asymmetric spinnaker. To say that first night was interesting would be an understatement! I think we dropped four hours out of the race. So sunrise found us heading south around Batemans Bay with some significant sail handling issues to be addressed. We had dropped the sails down to main and the big jib top which was very manageable and gave a lot of the crew the opportunity to steer.

I should introduce the crew to you; starting at the bow with Ilter, the two mast men were Duncan and Jordan, Cathy, Jodie and Bridget on strings and trim, Mike and Andrew heady trim and steerer, Jen heady and spinnaker trim, Craig navigation, watch captain and steerer, Mark watch captain, boss trimmer and steerer, Steve and Kirk on main sheet, Mitsu and Mat on pumps and yours truly doing something.

So where are we first morning? 35 miles behind where we should be … do we pull out or go on?

I must admit after the previous night’s performance the thought of withdrawing crossed my mind. The weather forecast was good, and this type of decision has to be put in the context of your environment and the team were taking ownership of the situation so Cape Rhouel and organ pipes here we come. That night saw us crossing Bass Strait with 30 knots of NE, Mark tipped out at 20 knots plus boat speed.

After a fast passage across Bass Strait sunrise found us south of Eddystone light. One of the things that people may not understand is the decision-making process that is going on constantly on a race yacht, in this case… do we close the coast early? Do we stay out wide? And what about that no wind patch that is somewhere out in front of us? It is at these times access to good weather information becomes paramount. Back to the race and by now we were handling mast head spinnakers and handling them well. I was pleased with the decision to proceed. Struggling around Tasman Light in next to no breeze saw some nice sail trim as we gibed and gibed and gibed. After being becalmed off Port Arthur the crew worked us back into the breeze line. We felt our team mate Bear’s presence with his wet weather jacket flying on the pushpit, Duncan on the wheel for the finish, with a honking SE came up Storm Bay sending us home, he will be always part of SWD’s future.

So where will our 25th Hobart go in SWD history?

It has to rate as one of our best races for the following reasons; Firstly, SWD did in 2019 what it does very well, and I believe it is our strength, we took a disparate group of people on an adventure and got there, nothing broken, a few bruises that’s what we are about. Secondly, we had fun, too much fruit cake!! Thirdly, lots of people helping lots of people to achieving their personal goals. It’s amazing any time you have an opportunity to share in a person’s life’s journey.

So who are these people who started the race and ended up as a crew.

In no particular order, or significance:

It would be remiss, not to mention three people who added significantly to this year’s campaign:

So that was the crew of the 2019 Rolex Sydney to Hobart, so that’s what it takes to make a successful team.