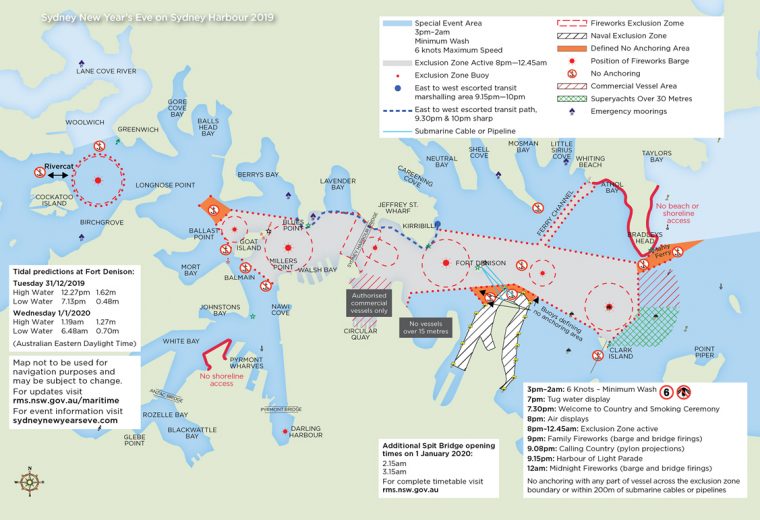 Skippers are advised to go easy on drinking, be mindful of others and arrive early for the best viewing spots on one of the busiest days on Sydney Harbour, New Year’s Eve.

NSW Maritime Executive Director Mark Hutchings said more than 4,000 spectator craft are expected to converge on Sydney Harbour to see the fireworks and other entertainment, including the 9.15pm Harbour of Light Parade.

NSW Maritime will manage the on water safety and traffic management for New Year’s Eve on Sydney Harbour with around 50 patrols boats, including those from Marine Area Command Water Police and NSW Marine Rescue.

“Sydney Harbour is one of the best locations to view the lights and fireworks at 9pm and midnight. There will be a large number of boats competing for a limited number of anchorages and we want to ensure we do everything we can to facilitate safe vessel movements and prevent tempers flaring on the water,” Mr Hutchings said.

“Boaters need to leave home early to secure prime vantage points in daylight, be patient as there will be a lot of marine traffic and crowds accessing the water at boat ramps, ensure vessels are out of exclusion zones and keep to the maximum six knot speed limit.

“Exclusion zones will be in place from 8pm on New Year’s Eve to 12.45am on New Year’s Day extending from Cockatoo Island in the west to Clark Island in the east. No unauthorised vessels will be allowed in these areas during this time and access beneath the Sydney Harbour Bridge will be prohibited. The speed limit for recreational vessels in and around the exclusion zones will be six knots.

“Skippers should make sure their anchor is secured and won’t drag, and boats have enough room to freely swing and not hit another vessel.”

He said although last year on Sydney Harbour there were a handful of fines for not following lifejacket rules, the vast majority of boat operators were respectful and followed the rules.

“There’s a lot to celebrate on New Year’s Eve, just remember the alcohol limit for skippers is 0.05 (zero if under 18) – the same on water as it is on the road – and there’s also no place for taking drugs and boating. If you plan to have a drink, ensure you have a Plan B – such as a designated skipper to get you and your boat home,” Mr Hutchings said.

“It is also the skipper’s responsibility to ensure all of the appropriate safety equipment including lifejackets, navigation lights and anchor lights are on board, in working order and used when appropriate.

“When the fireworks are complete, skippers will need to exercise patience as the fireworks barges cool down and thousands of other boats will be moving around the harbour with limited visibility.

“It’s important in choppy conditions for everyone to wear a lifejacket, take it slow and reduce wash. Skippers must keep a proper lookout at all times and maintain a safe speed.”

Last New Year’s Eve there was one notable incident which resulted in a serious injury to the skipper and a written off boat after a fire started on board the vessel after refuelling at a marina.