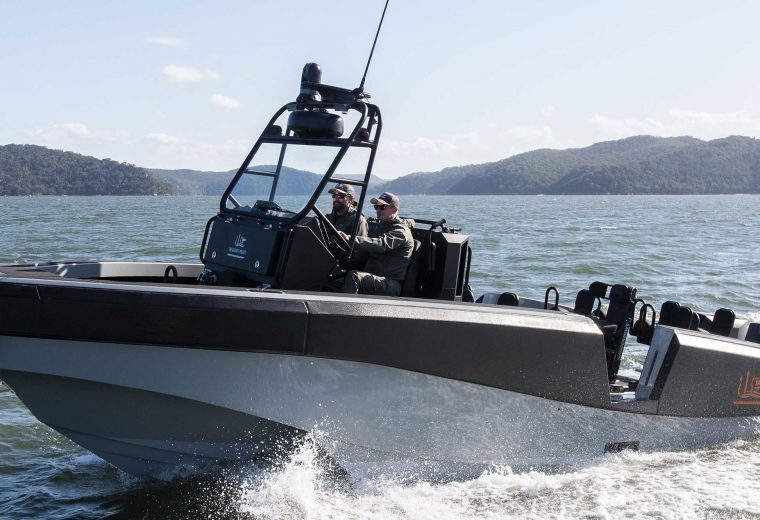 The highlight of the recent Pacific 2019 Expo at Sydney’s Darling Harbour, the intriguingly named “The Whiskey Project”, stole the spotlight with the launch of its first boat – WHISKEY ALPHA eight five – and won a legion of fans for its aggressive profile, versatility and performance capabilities.

The “Whiskey” nomenclature is derived from the NATO phonetic alphabet where “W” denotes the military water operators and “Whiskey” is their callsign. Whiskey Alpha eight five is 8.5m long but is scalable from 6 to 12-metres.

Featuring a new-technology hull that boat builder Brett Van Munster describes as ‘disruptive’, the high-performance powerboat hull is made from advanced carbon fibre composite materials which provide a greater strength to weight than traditional aluminium or FRP hulls.

The revolutionary Sea Blade hull form is the product of a decade of research and development to design the ultimate foundation for mixed sea states and offshore applications providing greater stability and seakeeping whilst achieves a higher average speed than a comparable deep-V hull.

As Brett Van Munster explains “The co-founders of The Whiskey Project commissioned the design based on their 20 years’ Defence experience as tactical maritime operators, and they intimately understood what the capability gaps were in the existing craft being used globally.

“They knew the current boats were simply not fit for purpose. Whether they are from military or police or other state agencies or even support boats or tenders, operators need watercraft that offered a higher level of seakeeping and safety but also high-speed offshore capability in all sea states as well as low speed manoeuvring for the boarding, recovery or disembarking of ships.

“These vessels needed to offer an unprecedented level of stability and high-end performance!”

“Darren and Ryan were really motivated. They had the financial backing and a clear conceptual design brief when they approached us.”

With a similar ethos, Van Munster boats, established in 1988, is a second-generation family-owned and run business that has earned a reputation for innovative custom builds. Their “bread and butter” is 18 and 16-foot skiffs, for which they’ve been the international Class builder for the past 14 years.

“The reason we established the business was that we couldn’t find what we wanted in the market. We were seeking better technical construction in our boats, and that’s what we strive to achieve in our boats every time.”

Specialists in custom composite construction, Van Munster Boats had a clear build and test deadline for The Whiskey Project boat of the 2019 Pacific Maritime Expo.

“The timelines are never as long as you’d like them to be,” says Brett. “But we specialise in race boats, so we’re used to the environment of high performance and high expectations. That’s the culture of our business and how we operate. But it was a good challenge. There was no fallback, no wiggle room. The whole thing had an end date. It was a like a race from the start to the finish and we delivered.

“One of the key challenges that always arise on tight time frames is material procurement. Fortunately, we have good suppliers such as ATL that we can rely on to deliver. You can’t do this kind of project by yourself.”

Nicholas Cossich, Director at ATL Composites said the smooth process from brief to completion on the Whiskey Project was testament to the strong relationship between ATL and Van Munster Boats.

“It’s an immense privilege for us to work with such a dynamic and supremely talented group of people operating at the highest echelons of the marine industry. Brett and his team really demonstrated true ingenuity and focus in delivering the WA85 and we are very proud that he chose to use our Australian technology to deliver such a ground-breaking vessel.”

For two decades, Van Munster Boats has worked with ATL Composites on numerous projects ranging from classic timber construction in the early days, through to the high performance, advanced composite boats they’re renowned for now.

For The Whiskey Project, ATL Composites supplied Divinycell foam core to deliver the high strength structure required in such extreme operating conditions, and fast speeds, and custom DuFLEX panels for deck, cockpit and internal framing. ATL CNC machined components to the uniquely engineered requirements “and we just dropped them into the boat” added Brett.

The Whiskey Project lead engineer Brett Ellis has been a friend and colleague of Brett Van Munster for decades and proved an invaluable part of the team, bringing his depth of experience as a structural engineer specialising in composites for Gurit, as well as Prada, Alinghi and Artemis.

The effort paid off and Whiskey Alpha eight five was the centre of attention at Pacific 2019, the biennial international maritime expo that attracts 22,000 visitors over three days, representing Defence, Government and Scientific industries from 48 nations.

“It was awesome for us to see the reception,” said Brett. “The Whiskey Project was the star of Pacific 19 and the Australian Defence Force all know about this vessel now!

“It was a whole new world and a real eye-opener for us as a niche business. We were very proud to demonstrate that we have the skillset, capabilities and craftsmanship that create a world-class product.“There has been huge interest following the event from both domestic and international defence delegations as well as other government agencies and we are looking forward to the next phase of The Whiskey Project.”More at