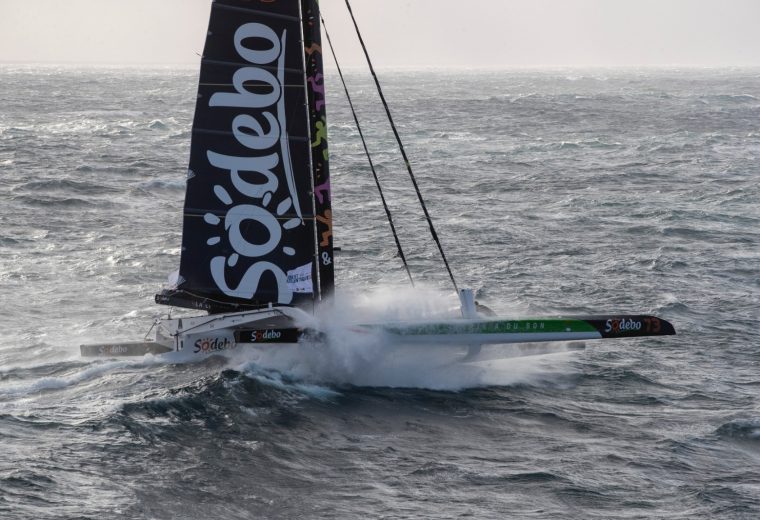 Thomas Coville and Jean-Luc Nélias, who have been in Cape Town since Thursday, today announced their decision not to continue on the Brest Atlantiques, as the damages to their boat are too serious to carry on safely. At the head of the fleet, Maxi Edmond de Rothschild is continuing her ascent along the coast of the Namibian desert, 300 miles ahead of MACIF and Actual Leader.

Thomas Coville and Jean-Luc Nélias, in agreement with their partner Sodebo, today announced their decision to drop out of Brest Atlantiques. Sodebo Ultim 3 suffered damages following a violent blow with an unidentified floating object, which led the team to make a pitstop in Cape Town, where they were joined by members from Sodebo’s technical team

As Thomas Coville explained in Sodebo’s press release: “Before setting off on the long final stretch back to Brest, we wanted to make sure that the boat was intact. But further investigation revealed damages to our starboard side. We started strong, given the tough conditions for a new boat, and in Rio, after MACIF and Maxi Edmond de Rothschild’s pitstops, we took the lead. The whole race was going well, until the violent shock that has now put us out of action. It was a very exciting race, and it’s greatly frustrating to have to give up. But this is only the start of our journey on these boats. Good luck to all those who continue.

After 17 days at sea, the three remaining trimarans are in full racing mode, sailing along the coast of the Namibian desert. MACIF and Actual Leader actually came within very close reach of one another, to the skippers’ great delight: “We’ve just seen the magical beaches of Namibia, it’s incredible, we’re in places where no one ever comes,” Yves Le Blévec said, while François Gabart was equally blown away by the scenes: “It’s quite impressive, seeing a place you don’t know very well, a place of extraordinary beauty, with sand dunes that lead into the mountains. The beach is practically untouched.

In first position, Maxi Edmond de Rothschild at 3pm today was ahead of MACIF and Actual Leader by 298 and 301 miles respectively. A decent lead, but the weather in the coming days is very unpredictable and so nothing is guaranteed for Franck Cammas and Charles Caudrelier, as Charles said: “There is a triangle zone of no wind along the African coast, which points west. We will try and head west, but that means covering extra distance, that’s the dilemma. If we go too far, we could rapidly lose our 300 mile advantage on the other trimarans. For now, I think everyone will have a pretty similar strategy, that of heading west, because there’s no wind at all in the east. That’s the big question for all of us and I don’t have the answer.” Well, neither do we . . .