16ft Skiff nationals to be a battle for the ages 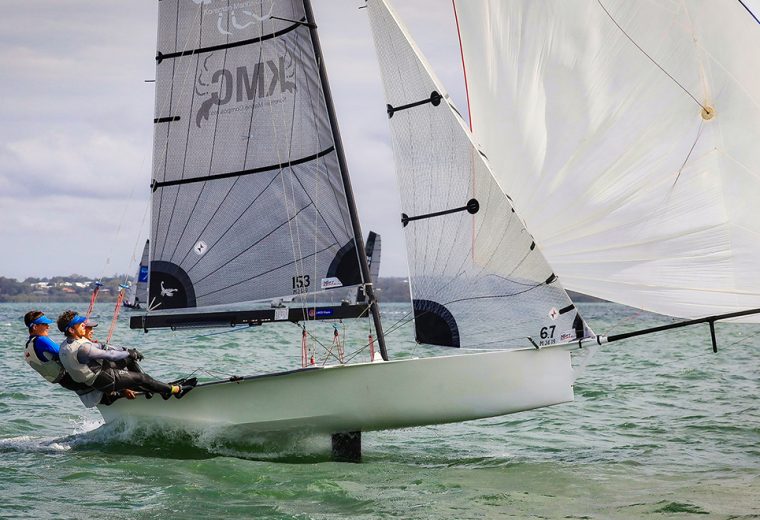 It will be on for young and old, literally, when the upcoming Australian 16ft Skiff & 13ft Skiff Championships get underway at Port Stephens from January 4.

Grech showed remarkable consistency in the previous nationals, missing the podium only once in seven races, and he’s itching to go one better aboard Koreman Marine Composites.

“We really want to get the win as we came incredibly close last time,” the 25-year-old helmsman said. “The class is super competitive and there’s an interesting tussle between the younger sailors and the older guys, some of whom are almost semi-professional.

“It definitely brings out the competitive nature in all of us.”

Ironically his skiff qualifies for the title of evergreen, having been built 15 years ago by Brett Van Munster.

“It was really cheap [$12,000] and rundown when we bought it five years ago, but we’ve invested a massive amount of time to bring it back to racing condition,” Grech adds. “We stripped the hull to bare carbon and repainted it, swapped the old alloy rigs for carbon and added some new TruFlo sails.

“We’ve generally done the development work ourselves because we like to trust in our own abilities. I think we’re as quick as anything going around in most conditions.”

Trent Barnabas, the 40-year-old sheethand aboard IMEI, has assembled a brand-new boat for his charge at a consecutive title, also roping in former Olympic gold medallist Nathan Wilmot as helm and long-time bowman Rob Napper.

“Felix pushed us to the limit last time and will be hard to beat again but, honestly, the goal is to win. Nathan is really keen, as he’s never won one, and we’ll certainly be doing our best while we still can,” Barnabas says.

“The young guys are definitely getting better with all the junior training programs that are available to them. They spend a lot of time on the water with top coaches, so they’re race- hardened, but we’ll try to outsmart them if we can.”

Trent began sailing the 16s as a 14-year-old, crewing for his father Trevor. He then diverted to the 18ft Skiffs before re-joining the class three seasons ago.

“Dad pretty much taught me everything I know, and he still gets out on the water to put his two- bobs worth in,” Barnabas adds. “I’m loving it. We’re having great racing with a great bunch of guys, and the boats are really fun to sail.”

Brydens Lawyers’ sheethand Peter Mackie has seen 53 summers, almost half of those aboard a 16ft Skiff, and he’s tasted considerable success along the way – five Australian and five NSW titles. With a newly launched skiff, Lee Knapton back at the tiller and the vastly experienced Ricky Bridge on the bow, he’s expecting more good results to flow at Port Stephens.

“We’re at the learning stage with the new boat, and it can be hard to get Lee on a Saturday due to his work commitments in real estate, but we sail through the week as often as possible,” Mackie says.

“The boats are very similar in speed, so consistency demands spending time aboard and chipping away to make sure the gear doesn’t let you down. A breakage can be the difference between winning and losing.”

Brydens is currently sailing out of St George among a fleet of eight skiffs, aiming to help reinvigorate the club: “There are some good young guys at St George and I enjoy helping them and bringing them through the class. But there’s a bit of rivalry at the same time,” Mackie admits.

“I’m really looking forward to Port Stephens – haven’t sailed there much but I’m expecting the conditions to be similar to our home waters of Georges River.”

Sailing his seventh season in the skiffs, Makin is also hoping for a strong showing on Tooheys Extra Dry with brother Grant on sheet and new bowman Nigel Hale.

“We’ve done a lot to the boat during the off-season,” Henry says. “Our ambition is certainly to get into the top five again but we’ll just have to wait and see.

“We definitely have a lot of respect for the older guys because they’ve been doing it for so long and are so good at it. I mean you work so hard just to keep up with them sometimes. They know all the inside secrets and tips, but they’re always happy to help us when we need it as well.”

The Australian 16ft Skiff Association is expecting a fleet of sixty 16ft Skiffs and fifteen 13ft Skiffs to compete on the neutral waters of Port Stephens from 4-11 January 2020. Host club Port Stephens Sailing and Aquatic Club at Salamander Bay will host nine races with two drops, up from a 7-race series with one drop as in previous years.

The Notice of Race and online entry forms can be found at skiffs.org.au or by emailing secretary@skiffs.org.au.