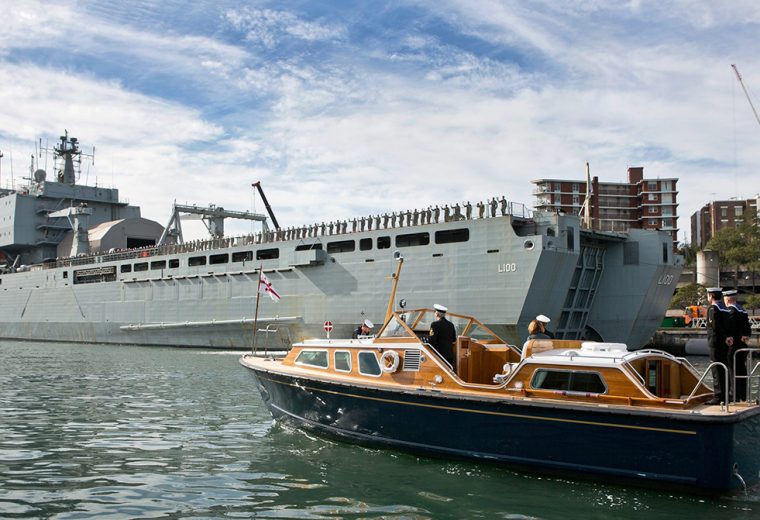 The Royal Australian Navy’s Admiral’s Barge, built by Norman R. Wright & Sons in Brisbane and commissioned in 1993, was recently refitted and reconditioned by the experts by High Tide at Sydney City Marine, earning glowing praise from the Fleet Commander himself.

The 12-metre ceremonial vessel recently returned to Serco in near perfect condition after undergoing significant work to guarantee its availability to continue to its service catering to high ranking dignitaries and military officers.

Speaking with Warren Levin, (Sydney City Marine’s Director for Commercial and Defence) during Pacific 2019, Fleet Commander RADM Jonathan Mead commented on the high quality of the engineering work and craftsmanship.

The Admiral made particular mention that he had never seen the craft in better condition and expressed his gratitude to the shipwrights, engineers and tradespeople at Sydney City Marine.

Wes Gorman, Shipwright Manager at SCM’s High Tide described the project as “a labour of love”.

“It was a huge project involving both superstructural work and engineering. Major mechanical parts and engine components that had been outmoded had to be re-fabricated or repaired. We also installed a new AC system.

“While it’s not an historical vessel, it is a classic and all shipwright, painting and electrical work had to be in harmony with the original build. The last stage will be the final finish coat on her superstructure which we will undertake during the next docking in 12 months.”

The Admiral’s Barge is one of two vessels belonging to the VIP Boat Squadron and is the third vessel to carry the name since the conception of the Squadron more than 30 years ago.

It is used in the escort of senior Australian officials and foreign dignitaries on ceremonial occasions such as Fleet Reviews and Australia Day commemorations in and around Sydney Harbour. The 2011 Royal visit was an historic occasion for the VIP Boat Squadron and the Royal Australian Navy as the Admiral’s Barge temporarily undertook ‘higher duties’ in service of Her Majesty Queen Elizabeth II.

High Tide is part of the Sydney City Marine company, offering the full range of shipwright services across vessels of all sizes.