LOTS of courage, competition and camaraderie 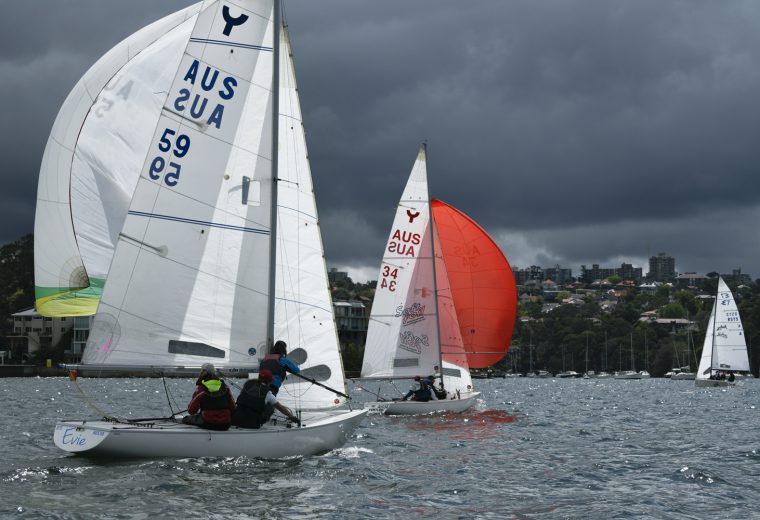 Madi Kornman, just 21 and skipper of the all female crew racing Zig Zag, steeled her nerves, called for the spinnaker hoist and beheld a most satisfying sight as the red kite unfurled and set.

“I had been too nervous to fly the kite in the first two races, but on the third, I finally summoned my courage and went for it. It was so exhilarating to watch it fly, my crew did an amazing job,” said Madi afterwards.

Madi’s sentiments were echoed by many other participants at the Royal Sydney Yacht Squadron’s inaugural Ladies of the Sea Coaching regatta held over the weekend 5-6 October. Many women said they had long sailed with family members but were now discovering sailing for themselves and especially the joy of helming.

“I’ve sailed with my father, my brothers, my husband… Now I’m sailing for myself!” said one. “I loved helming a smaller boat as a change from crewing on a yacht,” said another.

Nickie commented, “I believe in showing, not telling. First we discuss techniques and manoeuvres in the classroom and then they head out on the water and try it out for themselves. That kind of trial and error is invaluable to building skill and confidence.”

Her method certainly seemed to work: “It was great to test out what we’d learned in coaching. I’ve grown in confidence. I’m not just participating, I’m here to compete!” enthused one sailor.

Bonded by a common love of sailing, the sense of collective purpose was palpable: “It’s brilliant to meet women sailors from so many clubs.”

“I love the camaraderie, the sense of community.”

The presentation dinner was held on Sunday evening and the Squadron’s Carabella Room was packed to capacity. First there was a standing ovation for Karyn Gojnich whose brainchild this event had been. The audience was then treated to a talk and Q&A with Rio Olympic Silver medallist Lisa Darmanin, Match racing champion and Ocean Respect’s Katie Pellew-Spithill, and London Silver medallist Lucinda Whitty. They discussed the challenges all had faced balancing sailing at an elite level and progressing a career; their desire to see equal opportunities for females in sailing, equal pay and prize money; and how they juggled an Olympic campaign with family life. When asked what boats they would like to sail next, Lucinda exclaimed “A foiling moth!” adding “although maybe I am not ready to take on the associated boat work.” Lisa is considering an A class cat, and Katie will settle for a windsurfer: “Fast, but without the boat work.”

There was an enticing array of prizes from the event partners including Paspaley, Mariner Boating, Everyday Cashmere, Above and Beyond Boating and Marine Safety Works.

Karyn Gojnich commented ”To me it is great to place in a regatta but I also feel it is important to recognise participation. We had some great prizes for those that sailed with us and did not get on the podium.” All participants went into a lucky draw and the winners were:

Each boat that entered received a voucher for an Online VHF Radio Course with Above and Beyond Boating.

We are grateful also to Berkelo for their fresh bakery treats and Dr Michael Finkelstein for his dental care packs.