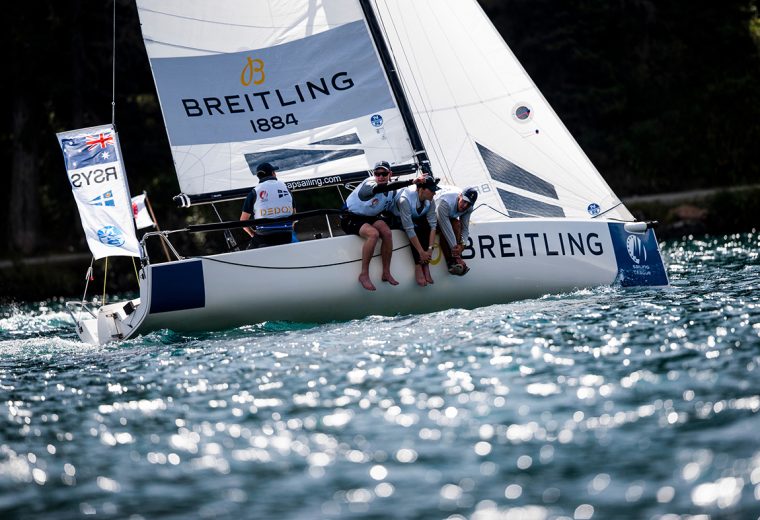 The most recent victory, the Rolex New York Yacht Club Invitational Cup at Newport RI, was led by former Farr 40 world champion and multiple national title holder Guido Belgiorno-Nettis. The RSYS team sailed 12 races in mid-September on an IC37 in a full range of conditions, becoming the first southern hemisphere club to be worthy of the coveted silverware.

“You can’t describe the feeling of coming all the way from Australia, putting a team together on a boat we haven’t sailed before, and actually winning a championship like this,” said Belgiorno-Nettis amidst the dockside celebrations.

Less than four weeks earlier, the Sydney club that was established in 1862 scored a major interclub win at the Sailing Champions League Final at St Moritz, Switzerland. Skippered by David Chapman, the young team dazzled league organisers and followers with their fleet racing prowess in an unfamiliar class of J70s, and beat-up on the heavy European line-up. The fact it was Oceania’s debut year at the league made victory that much sweeter.

Chapman, siblings Finn and Charlotte Alexander and Zac Quinlan came to be up against 23 other teams on a lake in Switzerland having won the open division of the inaugural National Sailing League Final hosted by the RSYS in April.

Around the same time, RSYS member and Rio 2016 silver medallist Will Ryan and his 470 skipper Mat Belcher again showed they are a real medal chance at Tokyo 2020 when the pair claimed their fifth world title, this time in Enoshima, Japan, where the Olympic competition will play out. The victory confirmed their selection to represent Australia at what will be Ryan’s second Olympics and Belcher’s third.

Squadron member Jim Cooney and his supermaxi racing team on the striking black and red coloured Comanche won the Barn Door Trophy for first monohull to finish the 50th LA – Honolulu Transpac race in July. Comanche’s time was 5 days 11:14:05, achieving a VMG of nearly 17 knots on the course and delivering the owner and crew the stunning carved slab of Hawaiian Koa wood trophy.

The Havoc team of Murray, Allanson and Colin Beashel were clinical, leading the series from the outset and spurred by the world-class competition snapping at their transom, in particular Graeme Taylor’s Magpie, with RSYS member James Mayo on main. The two Aussie teams finished two points apart and another three Australian teams made the top 10 from the 37-boat fleet.

On his club’s outstanding success across the northern hemisphere summer, RSYS Rear Commodore Christian Brook said, “What a great season for the club; our members taking top honours in multiple prestigious international events. Once they’re all back we’ll celebrate their successes and enjoy hearing about their experiences.”

Club Captain Karyn Gojnich noted: “What is fantastic about the SCL and NYYC results in particular, is that both teams included some of our most experienced members mentoring up-and-coming Youth Development Squad sailors.”

Testament to the club’s standing as an international event organiser is the recent announcement that RSYS be a key venue for the opening act of next year’s SailGP circuit, when the action returns to Sydney Harbour February 27-29, 2020. Later in the year the Squadron will host a third Farr 40 World Championship for the longstanding one design class.