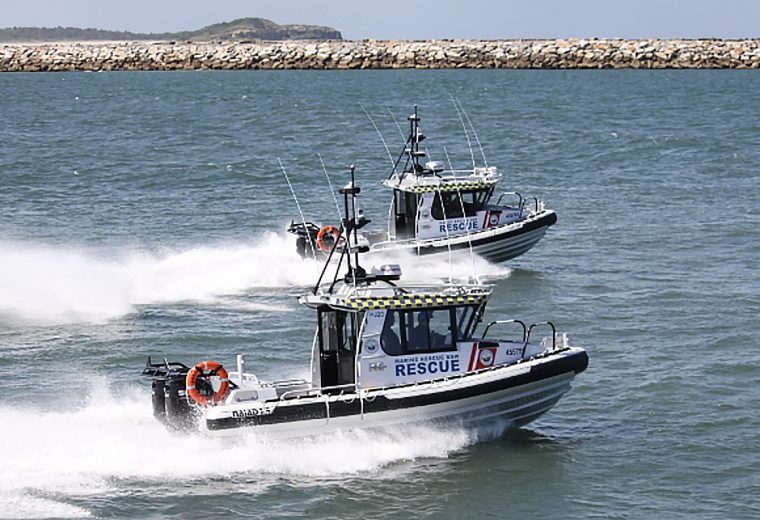 Ten volunteers from Marine Rescue NSW have won a prestigious international rescue award for saving the lives of three seriously injured men on board a sinking boat in the dark off the NSW Mid North Coast.

Four team members were present to receive the Outstanding Team Contribution to a Maritime Search and Rescue Operation award at a ceremony on board HQS Wellington on the Thames River.

The team also was commended in the National Search and Rescue Awards announced in Adelaide last night.

The three men on board the cruiser sustained a number of injuries, including broken bones, severe lacerations, punctured lungs and a spinal injury, when their 10m cruiser struck a submerged object off Crescent Head in the early hours of April 14 this year.

Two of the rescue crew members, without thought for their own safety, boarded the stricken vessel to provide immediate first aid and ensured that all three men made it off alive as the boat sank beneath them.

Commissioner Stacey Tannos said the volunteers were rightly recognised among the finest rescue teams in the world.

“Without the determined, skilled and courageous efforts of these volunteers, three lives would have been lost that night in the dark far offshore,” he said.

“They are genuine heroes.

“The crew worked seamlessly on land and water, firstly to locate the boat that had issued a Mayday call and then to carefully extricate the seriously injured men from the sinking and debris-strewn boat and return them to their families and friends.

“They deserve not only our praise but also our heartfelt gratitude.”

Commissioner Tannos said Marine Rescue NSW volunteers were professionally trained and equipped with a world-class fleet for their mission to save lives on the water.

“The efforts of the MR Port Macquarie crew and this award prove the value of the many hours our volunteers commit to training to build their essential life-saving skills so when the call for help comes, they are ready to respond,” he said.

Marine Rescue NSW Commendations for Courage have been presented to two crew members from rescue vessel Port Macquarie 30, Chris Condon and William Richardson, recognising their bravery in boarding the holed vessel and ensuring the three men made it to safety.

The Commissioner paid tribute to the professional response of the rescue vessel crews and the Watch Officers and Unit Commander in the unit’s radio base, who all worked seamlessly on the operation.

The radio base received a Mayday call from the stricken cruiser at 1.07am on April 14 but the location given by the caller – later found to have sustained a broken jaw – was difficult to determine.

As the Watch Officers persisted in their attempts to gain accurate coordinates for the vessel’s location and Unit Commander Davies liaised with the NSW Police Marine Area Command to coordinate the response, the rescue crew searched under darkness to locate the boat.

After searching north from Port Macquarie, the crew eventually located the damaged cruiser with the assistance of the Westpac Rescue Helicopter just south of Crescent Head.

When PM 30 arrived on scene, Mr Richardson and Mr Condon bravely boarded the holed vessel to provide emergency first aid to the three people on board.

As the cruiser began sinking, the pair ensured all three injured men escaped, painstakingly extricating the patient with the spinal injury from below deck where he had been trapped among debris, and keeping them afloat in the open ocean.

All five men were rapidly retrieved from the open ocean by the crew of Port Macquarie 30 and transferred to shore, rendezvousing en route with Port Macquarie 20, which had NSW Ambulance paramedics on board.