Rebirth of the Crest at Jervis Bay Maritime Museum 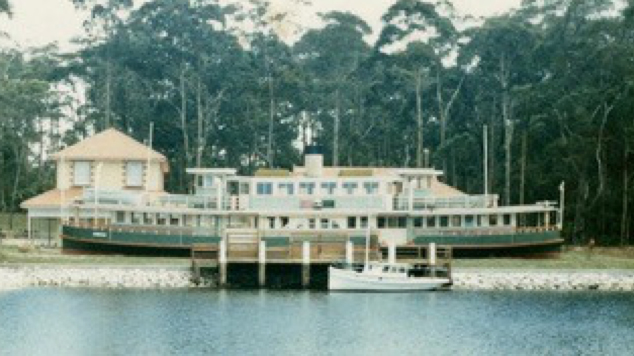 Main photo: Lady Denman and the Crest in the grounds of the Jervis Bay Maritime Museum, circa 1990. Photo John Settree

Along the coast of New South Wales, in any river, stream or creek protected from the summer nor’easters and the winter southerlies, and with a nearby forest of boat building timber, were the ideal places for the first European boat building yards.

Currumbene Creek, Huskisson, on Jervis Bay was one such location.

Sheltered behind the sand spit and with an extensive forest of spotted-gum just west of the Bay, the Dent family, who had settled in the area in 1861, set up a boat building yard and became, along with the Settrees, the best known of the Huskisson boat builders.

In 1911, the Lady Denman, a Walter Reeks designed ferry, was launched. She went on to do service on Sydney Harbour for 67 years, at the end of which she was donated to the people of Huskisson. Her subsequent rescue from Sydney Harbour became the stuff of legend.

In the same shipyard and the same year, the Dents built and launched the Ninon, a 8.5m long motor launch. She is a classic of the Dent’s recreational fishing boats with a plumb stem and a counter stern, characteristic of pre-WWI boats.

Built for Danish-born local fisherman Jack Rossen, and named after his wife, the Ninon was used in Jervis Bay, nearby St Georges Basin and along the region’s coast. After Jack died in 1957, Ninon had a succession of owners, but it was the second owner who named her the Crest and who replaced the single cylinder Frisco standard marine engine with an air-cooled three cylinder Lister diesel.

It was the last owner, Len Wright, who donated the Crest to the JBMM in 1987.

The Crest is the last surviving of Freddie Dent’s craft, has great heritage significance, and is on the Australian Register of Historic Vessels.

A survey for the ANMM in 2012 proved the boat sound and, given her age and history, was considered suitable for restoration to operational condition. A group of volunteers at the Museum gathered, raised funds and started the process of restoration.

Since then it has been a steep learning curve to acquire many of the skills of traditional boat building. Showing how-to was assisted by engaging a local boat

builder who had heritage fleet experience. Initially restoration was a two year plan, then four, then six, but now the volunteers are quietly optimistic.

Work began with scraping the hull, stabilising the planks, as well as building a cradle, with trolley, to hold her shape. Then the internal ribs and stringers were shaped, steamed, bent and roved. Then the replacement of planks and revival of the technique of “spiling” whereby Kauri pine is milled to shape and then bent around the ribs and clenched in place. Along with this, went the reconstruction of the eucalyptus-timber engine beds and floors, the rebuilding of the 3-cylinder Lister diesel and gearbox and replacement of the propeller shaft.

All this activity has generated a great feeling of achievement … and just recently the caulking and puttying of 250 metres of the gaps between the planks began. The help of experts was enlisted and a method developed to insert the oakum between the planks using some of the original tools used on the Huskisson boat yards. After seemingly months of hammering and tapping we have moved on to scraping in the linseed-oil putty to seal the seams.

The launch date gets closer and closer.

The Museum is now working to get Crest “up to survey”, with the support of Marine Surveyor Adam Stafford. The work required to bring a 100-year-old boat to survey standard is providing a new set of challenges.

Along the way the task has, at times, felt overwhelming and at others, exhilarating. Over the years, the volunteers have changed and they remain an enthusiastic group who each have different backgrounds and each develop the skills needed to put an old vessel back in working order.

Many items are still needed to get her safely on the water. Any boating equipment you may have lying idle and don’t see yourself using could play an important part in the rebirth of the Crest.

Both Crest and Lady Denman are on display at the Jervis Bay Maritime Museum in Huskisson. Drop by and see us!