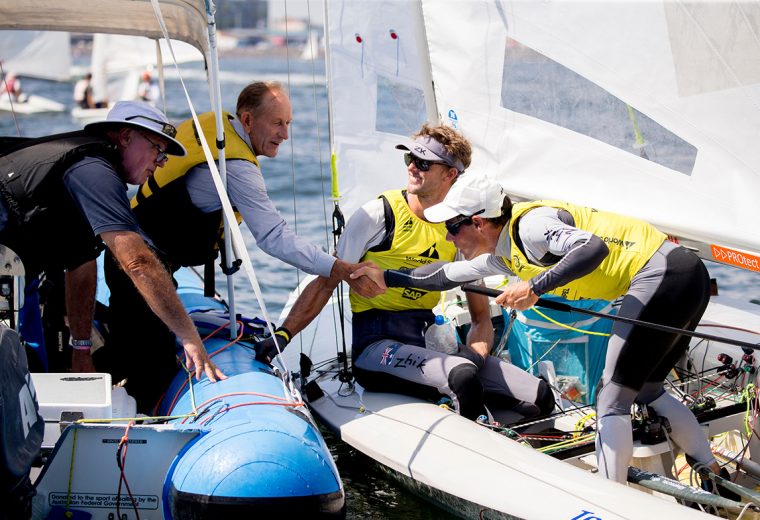 “It is the nature of the habit, a winning spirit, and the will to win.” This is how the inspirational Australian Sailing Team (AST) coach of the Men’s 470, Victor Kovalenko distilled the victory of his champions – Mat Belcher and Will Ryan – after their latest win in Enoshima.

It is a statement that can be happily applied across the whole team, as they left the Olympic waterways of 2020 with Gold and surprise Silver in their pockets, as well as healthy top ten results for three quarters of the squad.

With spectacular speed on the last run to home, the indisputable doyens of the 470s finished a comfortable ten points clear of the pack in the class they have dominated together now for seven years. Peaking at the World Championship, the pair now has five regattas in a row, including the last three at Enoshima. It leaves them right on target for the Olympics in 2020.

Note that in 2000, Australia won Gold in both the Women’s 470 (Jenny Armstrong and Belinda Stowell) and Men’s (Tom King and Mark Turnbull). In 2008 the double Gold was achieved again, with Elise Rechichi and Tessa Parkinson and also Nathan Wilmot and Malcolm Page.

A paltry 4-knot breeze deprived the Laser class of their medal race and so Matt Wearn retained Silver. Team mate Tom Burton was left frustratingly just off the podium in fourth, not the place for the reigning Olympic Gold Medallist and a reminder of just how closely matched the two champions of the Laser class in their wrestle for the one only Olympic berth.

AST Laser Coach Michael Blackburn was clearly happy with his two geniuses in class and a clutch of talent also under his charge.  “We had high goals, and we are close. I now have a list of things to work on in the lead up.”

Heading into a medal race for the first time in a pair of golden bibs was nothing other than surreal for young Nia Jerwood and Monique de Vries, the two West Australian 470 dynamos. Pulling off a Silver medal in around seven knots of breeze was testimony not only to the talent of the latest female stars of the team, but the sheer quality of their female coaching.

Clearly the efforts of overseas Ruslana Taran the thrice World Champion in the 470 from the late 90s, and coach at home in WA Belinda Stowell have born fruit.

Showing remarkable composure for her 20 years, skipper Nia Jerwood spoke for the pair after they completed their 32nd race in the last five weeks by saying, “We had a lot of fun today, and are really stoked about it all. We wanted to remain cool headed, calm and decisive, and that’s what we did.”

“At the end of last year we were disappointed; the doubt had started to creep in. Now were more motivated more than ever and just keep working away, as we have the inner belief that we can do it.”

Nerwood thanked coach Taran for the huge difference she felt she had made to their results in the last five months. The pair also worked with her back in 2017.

“Ruslana is amazing. It is both her incredible credentials and the way she delivers the material – the right amount of information at the right time. She has such a good eye. Make one little mistake and she sees it.”

Director of High Performance, Iain Murray is clearly delighted with the progress of the 470 women’s crew.  “All the actions we took one year ago are vindicated by the results,” said the lead architect of a winning formula that includes cunning race craft and an intense physical training of mixed crews at a State level.

Like the Laser, the Finn medal race was abandoned, Jake Lilley was happy to have ten races for a complete series, but noted that the Finns have not had a medal race in Enoshima in the last three attempts. “Top ten was the goal here and now top five is the new goal, which is what we’ll chase in Melbourne in December.”

Gold and surprise Silver are beacon results for the whole AST that reminds everyone of the words of Dick Sergeant, one of three original Olympic Gold Medallist of Enoshima in 1964 earlier in the week. “Anything is possible,” he said. And so it is for a talented team on the march to the promised land of medal aspirations and glory.