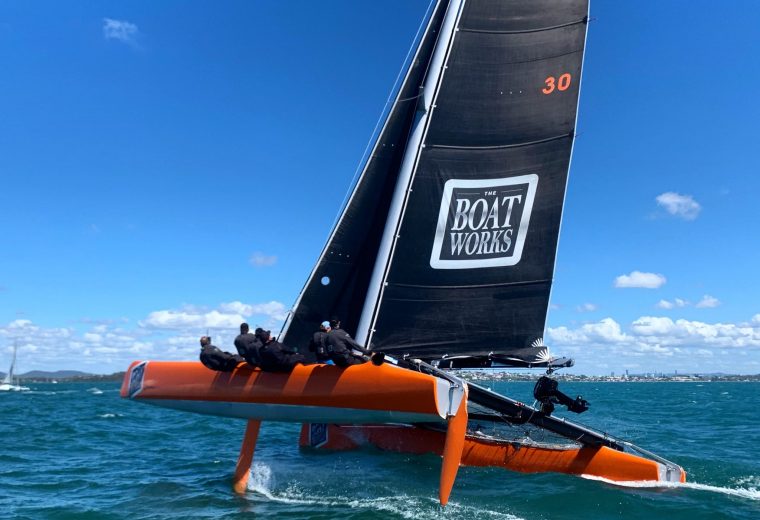 The fleet of four performance racing catamaran’s – the ‘Extreme 40’s’ are marshalling for Airlie Beach Race Week, enjoying the sunshine and looking forward to close, competitive racing for the next three weeks.

“We’ve waited close to four years for this,” said Julian Griffiths, skipper of ‘The Boat Works’, resplendent in orange and the most experienced of the four.

“It’s been a long journey to get the three other Extreme boats here and now we’re track to getting the Extreme one-design racing on the map. It’s such exciting racing for spectators. These boats were built for stadium racing, so it’s close and really competitive.”

At Airlie Beach, the fleet of four – ‘The Boat Works’, ‘Back in Black’, ‘High Voltage’ and newcomer, ‘Deepwater Collective’ – all weighing in at roughly 1.520kg, will compete in the Multihull National titles. Looming large is another addition to the multihull fleet, Tony Considine’s new TF10 fully foiling trimaran, ‘Mad Max’.

The Boat Works is crewed by “three whippets and three comfortable fellas”, as Julian describes them.

According to Julian, there’s good synergy among the crew. “We’ve all sailed together at this regatta previously and we’re all familiar with boat. We’re a happy, cruisy bunch of guys, Sponsored by The Boat Works, Land & Sea Noosa Beer Brewing and Leave Your Worries Behind Sunglasses from Airlie Beach – so it’s all good!”

Commenting on the newest recruit to the Extreme 40 fleet, Deepwater Collective, Julian said “They’ve only been on the water for four weeks, so they’re playing it pretty safe”.

“They’re all good sailors and they know these waters well, so we won’t be discounting anything!”

But friendly competition aside, all the Extreme teams are good mates. “We all know each other well and there’s no angst there,” affirmed Julian. “All the Extreme 40s were assembled and commissioned at The Boat Works, the Gold Coast Boatyard & Marina that is expanding at a rapid pace with a new 300 tonne onsite. We all help each other out and share expertise when it comes to the boats, but on the water, we’re out to win. That’s what’s so exciting! It all comes down to tactics on the day, and a bit of luck. It’s anybody’s race.”

‘Back in Black’ owner, Michele Pastors said his crew are ready and excited.

“We’ve trained for Moreton Bay so we all work well together. Last night we took part in the invitation race – just us and The Boat Works. It was very close racing and the lead changed six times.

“It would have been great to see the other two Extreme 40s race, but that will have to wait till racing starts Friday. Conditions were very light, and we were lucky to get any racing in at all.”