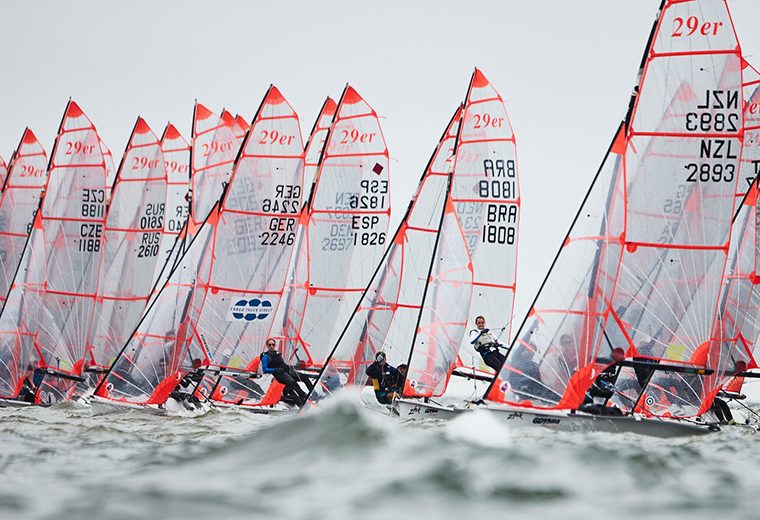 At the Zhik 29er World Championship in Gdynia, Poland, Australia’s Archie Cropley and Max Paul combined skillfully on a tough Baltic coast track to finish sixth in the open results from a starting list of 175 skiff teams.

The teenagers reached as high as second on the ladder midway through the July 26 – August 3 series, then light and tricky airs on the final two days of competition made conditions super shifty. Races were postponed and choosing the optimal side of the course became a lottery that turned results to that point upside down.

“Our 29er adventure comes to an end in rather disappointing circumstances,” Cropley said as he began the long journey home to Sydney. “The wind for the last two days of the worlds was just terrible, with huge holes that could not been seen… a real lottery. We didn’t have a lot of luck out there. Despite some extremely marginal racing in gold fleet we managed to find ourselves in a position with a chance at gold in the final race. With the Americans deep and the French right with us in the back of the top ten, a big left shift dropped us back into the 20s and consequentially cost us a spot on the podium.

“Despite this, we are proud of our effort for the past month, our last together,” the 16-year-old added.

The French pair of Aristide Girou and Noah Chauvin beat the USA and Sweden to finish 2019 29er world champions.

Two weeks earlier Cropley and Paul, both members of the Australian Sailing youth team and NSW Institute of Sport athletes, nabbed the bronze medal at the Hempel 29er Youth World Championship at the same venue.

Instrumental to the boys’ rise in the 29er class is their Australian coach Mike Fletcher, recently awarded the NSW/ACT State Sailing Awards coach of the year and the nation’s most experienced Olympic coach. Harry Morton instructed the duo in Poland and across their European summer campaign.

Moving forward from the world series Jack Hildebrand will crew for Archie, and the new combination already has a big target on their calendar – to qualify for the 2020 youth worlds in Brazil. “As Archie is young, he can have another crack next year in Rio, and look to improve on the results from the past month,” father Geoff Cropley added.

Axel Fleet and Kieran Bucktin finished the next best Australian team at the 29er worlds in Poland, 21st overall and first in the under 17 division.