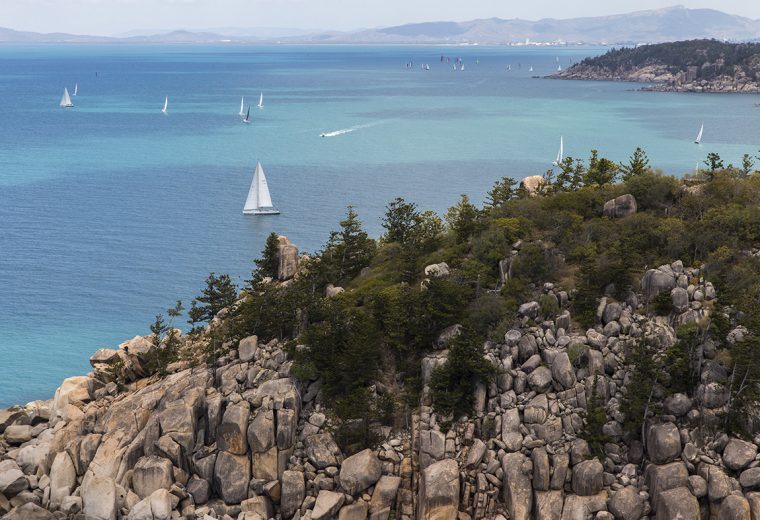 Organisers from Townsville Yacht Club (TYC) are thrilled to announce that entries for SeaLink Magnetic Island Race Week (SMIRW) have reached capacity before the event’s closing date; with more than a dozen boats waitlisted should space become available at ‘Maggie Island’.

“Our event has also attracted new sponsors, in addition to our longstanding event partners, as it grows in stature,” adds Pirret, who also competes with his Beneteau Oceanis 45, ‘Champagne’.

“Suncity Powersports is supplying jet skis for use by our course marshals; SOS Seafood, which is providing mud crabs to be raced at the Beach Retreat; Air North, which is generously donating our overall division winners’ prizes of return flights of choice to Air North destinations from Townsville; Honeycombes Property Group and Townsville Helicopters – ensuring our photographer, Andrea Francolini, gets the best images possible.”

The new sponsors will co-exist nicely with the stalwarts, including naming rights sponsor, SeaLink, and major supporters, Tourism and Events Queensland and Townsville City Council, both proud to show the great destination the region is.

Now in its ‘lucky 13th’ year, SeaLink Magnetic Island Race Week combines all the best ingredients to come up with and irresistible regatta with entries coming from every Australian state. In 2019, the Spinnaker class has proved the most popular class with 57 entered, including a few newcomers. Among them is the little NSW Army boat, Gun Runner, a Jarkan 925 entered by Kev O’Rourke.

Gun Runner won the Corinthian division in the 2018 Rolex Sydney Hobart. Her crew is looking to put in some hard training at Magnetic Island ahead of the 75th running of the 628 nautical mile race. The 9.2m boat will be joined by the likes of Brigus, Daniel McSweeney’s Beneteau First 35, which will make her racing debut at Maggie Island.

Another yacht of interest and new to the regatta is Ragamuffin 3, Stuart Tivey’s entry from Port Douglas. The German Frers designed 48 footer was the third Ragamuffin Syd Fischer commissioned for his offshore exploits. Built in 1975, Fischer missed the Sydney Hobart that year, but took her to third overall the following year and second from 131 entries in 1977.

Tivey says: “Big Mama Sailing purchased the boat in February 2019 in not such good condition. We have since restored her to be able to sail again.”

The trio of boats will take on some old hands, such as ‘Sir’ Robbo Robertson. A competitive and widely-known ocean racer from Queensland, ‘Sir Robbo’ will practice celebrating his December 11 80th birthday by reappearing at Race Week with his new Bavaria C45 named It’s Time’.

“I’ve raced at Magnetic Island twice before and won both times. The last time was 2012 with Bravo when I won every race,” he recalls.