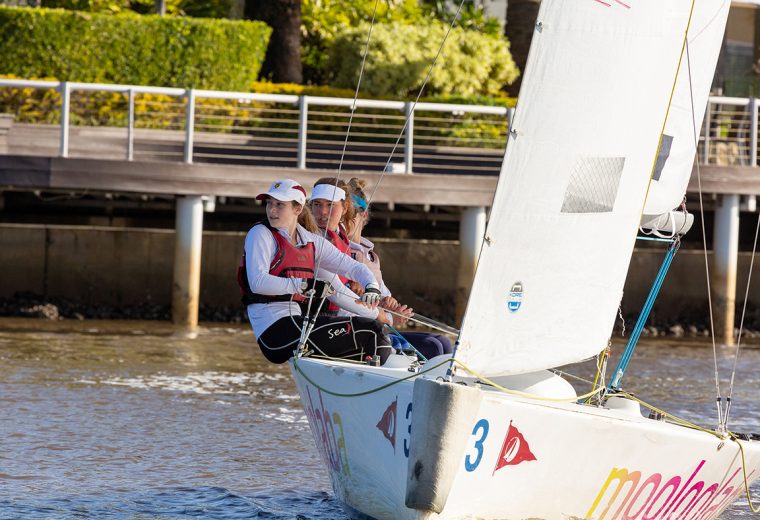 The award acknowledges an outstanding contribution to female participation in the traditionally male-dominated sport. The MYC Womens Skills Development Program was launched in 2017 utilising the club’s four Elliot 6 keelboats. It’s open to women of all ages who have some sailing experience and would like to improve their keelboat sailing skills. It currently has around 100 registered participants. Training is held on the Mooloolaba River fortnightly.

“The program has achieved outstanding results in the short time it has been operating, thanks to the dedication of a core group of volunteers, who share their skills, time and passion for sailing to advance the MYC Sailing opportunities for women,” commented Danielle Kennedy, Coach and Mentor for the program and Canadian 2012 Olympics Laser competitor.

As part of the program. Mooloolaba Yacht Club recently staged the inaugural SheSails Mooloolaba Women’s Winter Regatta over the weekend of June 29 and 30.

Some top level women sailors and the maximum number of team entries made for close competition, with competitors ranging from 16 to 60-plus years of age, and from first-timers to seasoned professionals.

Renowned international professional sailor Stacey Jackson (skipper of Wild Oats X in the 2018 Sydney to Hobart race, finishing 2nd in IRC and 6th across the line; and 2018 Volvo Round the World Vestas 11th Hour Racing Team member) teamed up with her Mooloolaba childhood fellow sailor Kristen Davidson and Carmen Barney to set the bar high in team Backstitch.

Aiming to get more women sailors out on the water and to develop skills at all levels, the regatta was a huge success. Teams came from as far away as Newcastle, NSW and Cleveland, QLD and, while the racing was highly competitive, all eight teams revelled in the camaraderie, support and fun that were the regatta’s underlying objectives.

The event maximum of eight teams raced on Mooloolaba Yacht Club’s four Elliot 6 boats on the Mooloolaba River, which made for challenging sailing and provided a colourful spectacle for locals onshore.

Third and fourth positions were also decided on a count-back with visitors from Newcastle Cruising Yacht Club(Screaming Jets), who had never sailed on an Elliot 6 prior to the event, finishing third and the Titanic Swim Team skippered by Olympian and MYC mentor, Danielle Kennedy, finishing fourth.

The MYC Women’s Skills Development program makes sailing accessible to women of all ages and backgrounds: for some local team members this was their first regatta. The program empowers women to overcome fears and barriers, build self-confidence and to connect with their local community all while having fun experiencing the great outdoors with a sense of freedom, adventure and achievement.