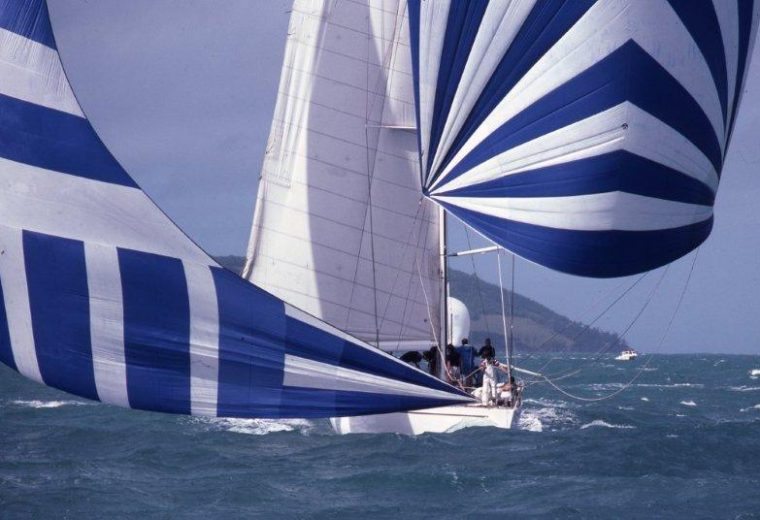 One of Australia’s most successful maxi yachts, the vintage Bumblebee IV, will celebrate its 40th birthday at Hamilton Island Race Week next month.

Now owned by well-known offshore sailor Graham ‘Scooter’ Eaton and based on the Gold Coast, the sleek 73-footer, which contested the inaugural Race Week in 1984, will be back  this year for its sixth campaign.

The birthday boat, due to receive a new wardrobe of upwind sails as a gift, will be among more than 220 yachts and 1500 sailors competing in the internationally acclaimed series, to be staged from August 17 to 24.

Built in Sydney in 1979 for local yachtsman John Kahlbetzer, Bumblebee IV’s design and aluminium construction was state-of-the-art for the era. ‘The Bee’ made its mark on the sport immediately after being launched by taking line honours in the Hobart race that year, then the following year finished first in the Newport to Bermuda race. It also raced in Sardinia.

Ocean racing legend Syd Fischer became the owner in 1984 and competed in the inaugural Race Week at Hamilton Island that year. He also contested four Hobarts with the  yacht, taking line honours in 1988 and 1990.

Graham Eaton was a member of the Bumblebee crew for many years and had no hesitation in becoming the proud owner when the opportunity presented in March this year.

“We’re looking forward to having a big celebration for ‘The Bee’ at Race Week this year,” Eaton said. “It’s all about great sailing and good times with friends, and that’s what the regatta stands for. It will also be a bit of a reunion as some of the guys who used to crew on the boat will be on board.”

For yachting history buffs, there is an interesting link between Bumblebee IV and the towering mast on the flag deck of Hamilton Island Yacht Club. It was originally Bumblebee IV’s mast! That mast broke when the yacht was racing off Sydney many years ago and to minimise the risk of damage to the yacht it was cut away and allowed to sink. After being salvaged and repaired it was purchased by Hamilton Island’s owners, the Oatley family, so it could become the impressive flag mast that it is today at the yacht club.